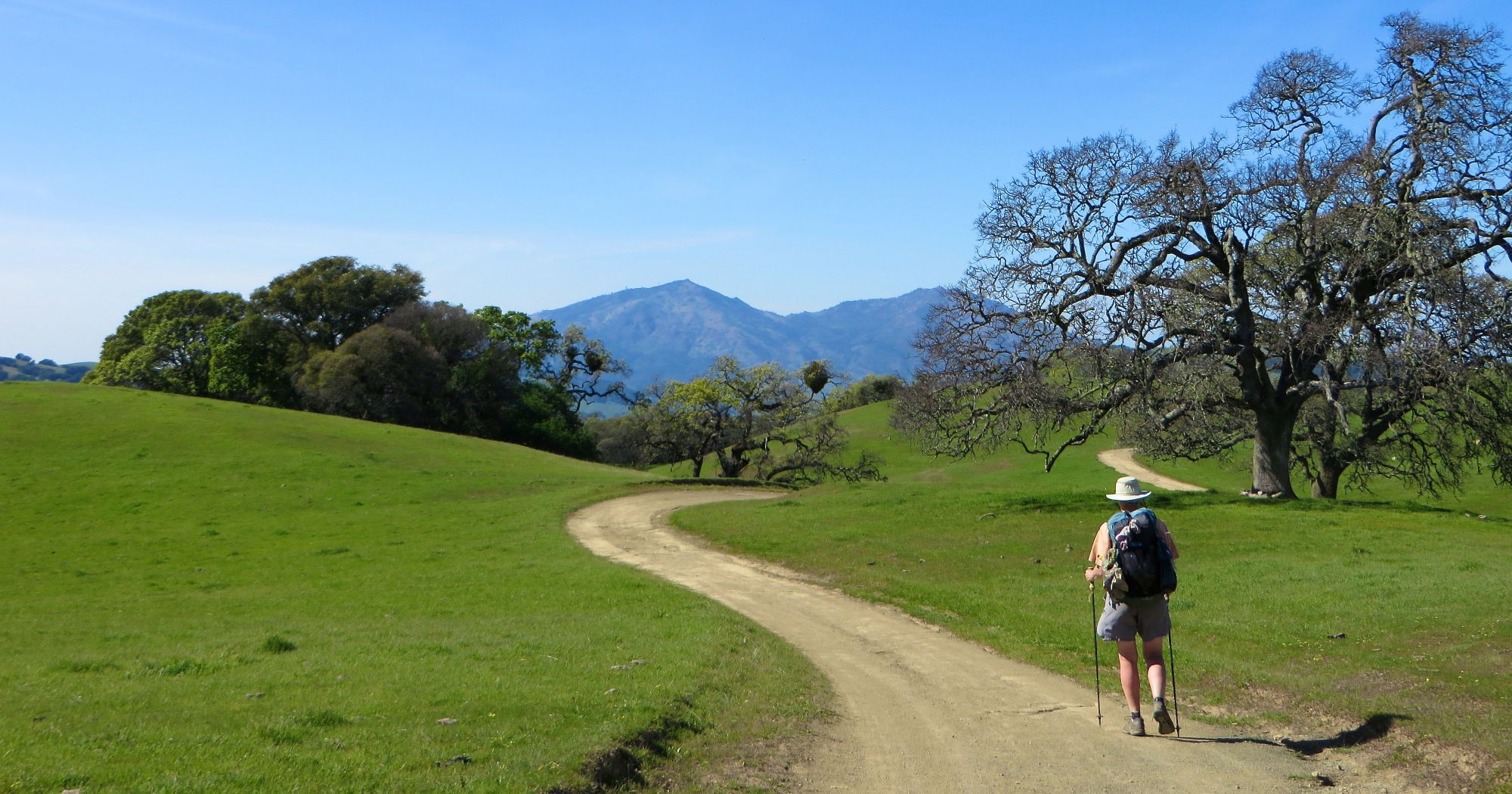 The Bay Area Ridge Trail Council has maps and useful information about trails and trail links.

The East Bay Regional Park District has downloadable maps for each of their 65 preserves.

Save Mt. Diablo, a local land preservation group, sells a very detailed map covering about half of the route. The map is so big that it is hard to handle in the field, but it is durable plastic and has excellent graphics.

The John Muir Land Trust is active in the northeast portion of this loop and has maps and guides to their preserves.

Pay attention to the publication dates on maps, as the NGOs and government agencies are actively purchasing park land in this area and often open new trails.

Two annual permits are required and are easily obtained by phone, e-mail, or mail:

We had completed many multi-day backpacking trips in the San Francisco Bay Area but had never taken a long hike in the East Bay, an area rich in public lands. James had worked on designing the BDL route for over a year and we wanted to walk it. The weather forecast looked excellent in early March of 2015, so off we went to take a long, fun hike close to home during the glorious California spring. 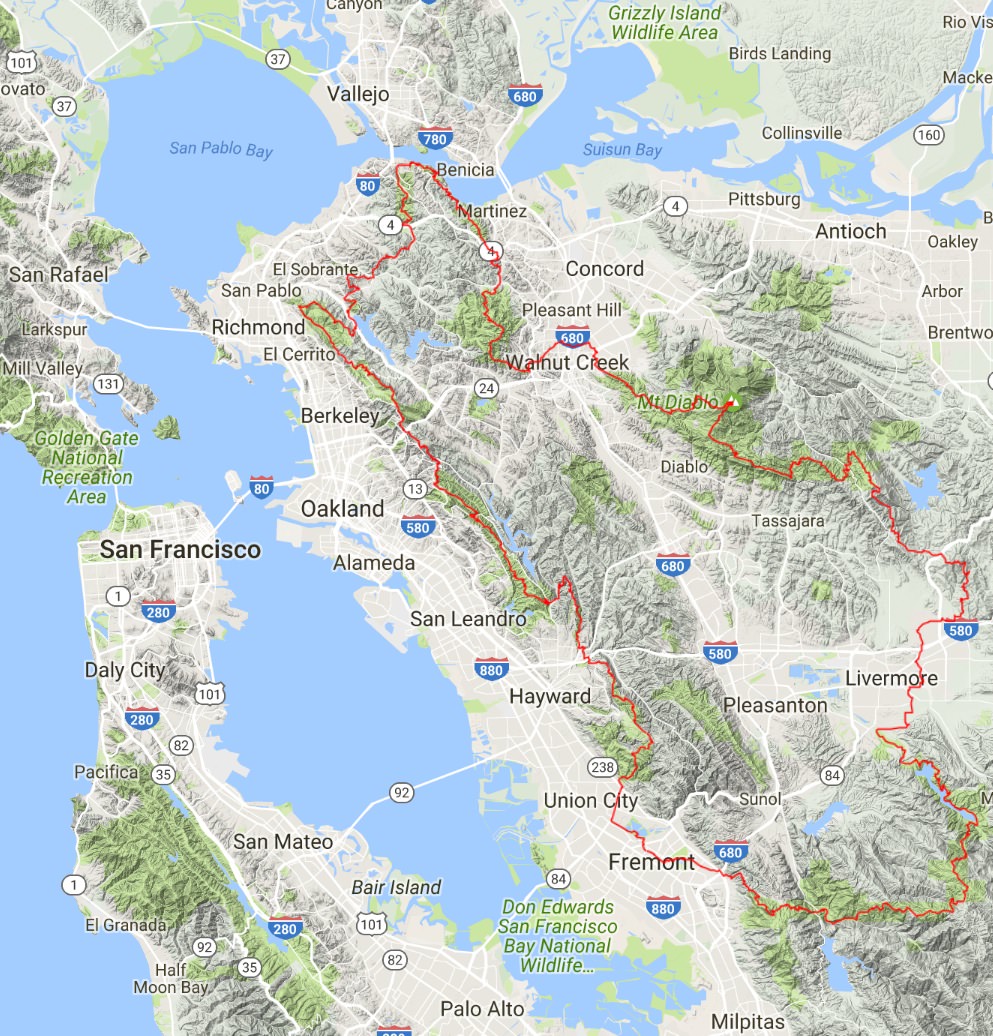 This is a brilliant route and I appreciate James for his willingness to spend many hours figuring out the best way to connect all of the parks into a continuous hike. I think it is one of his masterpieces. I believe this route is worth traveling from afar, and because it is at its best in March through May it makes a good destination for hikers who might otherwise limit themselves to alpine destinations. It is a great alternative to the John Muir Trail!

This was a very fun hike with beautiful diverse scenery. I thoroughly enjoyed every day. We walked for long stretches through remote lands where we saw no hikers for hours, counterbalanced by crossing Walnut Creek and Livermore on trail corridors crowded with joggers, cyclists, skateboarders, and dog-walkers. I enjoyed chatting with with such a diverse mix of people out enjoying their public lands.

We are fortunate that Bay Area residents value their public lands and continue to fund the acquisition of even more parklands.

I greatly enjoyed this walk. It is always a pleasure to be able to take a backpacking trip close to home without using a car. We are incredibly lucky to have vast amounts of open space, some of which is functionally wilderness, so close to home. Even though we have hiked extensively in the Bay Area for 35 years, we were still able to visit parks and regions we had never been to before. The diversity of the hike was excellent and passing through populated areas just added to the fun of the trip. The weather was good, the grass was green, the flowers were blooming, and the birds were singing.

The BDL route is about 212.5 miles and gains about 35,000 feet. To put this in perspective, the John Muir Trail is 210 miles in length and has a gain of around 46,000 feet. Given that the trail passes John Muir’s home, we think of it as a three-season JMT alternate, best hiked between September and May.

We walked the BDL March 6-16 of 2015. Including diversions to grocery stores, we walked about 220 miles on our trip. Subsequent to our completing the walk, various open-space agencies have acquired more land and constructed more trails. We updated the map in February of 2020 with a number of improvements made possible by these changes on the ground. We also rerouted a bit in Walnut Creek and in Fremont to move the walk off of some of the bigger streets. The CalTopo map now contain the new and improved route, shown as a red track. The map also includes our original 2015 walk shown as a green track.

In order to design the BDL James spent time over the course of a year studying park maps, satellite imagery, and Google street view. We took a scouting trip to investigate a couple of ambiguous areas. The big challenge was finding satisfactory links between parks, staying on various trail corridors and keeping off of roads as much as possible. Some of the links are not obvious from just glancing at a map, such as highway crossings enabled by unmapped pedestrian underpasses.

The route visits over 55 distinct parks including a National Historic Site, a State Park, many East Bay Regional Park District preserves, local city parks and recreation areas, land trust properties, non-motorized trail corridors, and water district properties. By piecing all of these together, road walking on a paved public road or on a sidewalk directly next to a street is reduced to a bit less than 12 miles; the longest piece is about 1.6 miles. Even though the route traverses Union City/Fremont, Livermore, and Walnut Creek, very little of it is on city streets because each of those towns has cross-town trail corridors. Some of the trails on the Loop are paved bike paths.

In many parks, there are numerous alternative ways to get from Point A to Point B; our choices were often arbitrary and there are many variations that could lengthen or shorten the route. Hike your own hike.

Roughly half of the loop follows the yet to be completed Bay Area Ridge Trail. Over time, trail access changes on the ground as the Ridge Trail Council and other agencies work to acquire and develop more parks and build new trails. We know of at least two areas where planning and/or trail construction is underway that will eliminate more of the road walking and make the park-to-park connections even better; we will update the route information when those connections are opened to the public.

The loop passes over three significant East Bay summits: Mission Peak, Rose Peak, and Mt. Diablo. There are many additional high points that provide fine vistas as well, sometimes with spectacular panoramic views over much of the Bay Area. From several high points, on clear days, the Sierra Nevada can be seen.

The BDL is a loop that can be started and completed at any point and walked in either direction. We use public transit whenever possible and since bus service from Palo Alto is fast and frequent to Fremont/Union City, we elected to start our walk there. The CalTopo map and route notes are written starting in Fremont and walking counter-clockwise.

Disclaimer: Do not rely on our exact tracks for your route; use skill and common sense. Use the stated distances as guidance; various sources of trail distances rarely agree.

The rainy season in the Bay Area is normally December through March. November and April are shoulder periods where rain is less likely but still possible. There is almost no chance of significant rain between May and October. Freezing temperatures are unusual, even in December and January.

Spring: late February to early May. This is the optimal time to walk the BDL. The grass is green and the wildflowers are abundant. The days are long enough that reasonable mileages can be achieved. Daytime temperatures are mild and it rarely gets very cold at night.

Summer: late May to mid September. Although viable, it is often warm enough that hiking is less pleasant. For instance, the average high temperatures in Livermore from June through September are in the mid to high 80’s.

Autumn: mid September and October. Temperatures are as favorable as April and May. The hills will be golden instead of green. Gaiters are essential as dry grass seeds will overwhelm socks. Some surface water sources may be dry.

Winter: November to mid-February. The first rains typically 0ccur around Halloween, and a week later the grass begins to sprout and the hills start to turn green. The normal winter weather pattern is to have 10-20 days of glorious mild sunny weather followed by a storm that lasts two to five days.  Hiking during a sunny spell in winter is great excepting that the days are short. Ten day weather forecasts are reasonably reliable and it is possible to hike the BDL between storms. If there has been substantial recent rain, many of the trails will be muddy; in some areas the mud is highly adhesive and can quickly build up on your shoes to the point where walking becomes difficult.

The tiny and quite funky town of Port Costa on the Carquinez Strait is an interesting and little-known piece of civilization. There is a bar, café, and small hotel providing services to visitors.

Our hiking style is to walk all day and find a campsite an hour or two before sunset wherever we happen to find ourselves, so we elected to stealth camp and had no problems finding suitable sites. We did not camp on East Bay Municipal Utilities District or San Francisco Watershed properties, as per the terms of our permits. We were never, to the best of our knowledge, observed camping by outsiders. If you engage in stealth camping on the BSL, you may be in violation of various park regulations.

Strong walkers may be able to do this loop using commercial accommodations by walking to a road crossing each evening and using Uber or Lyft to reach a nearby motel or AirBnB. We have not studied this option in detail.

511.org is the transit planning site that incorporates all regional transit systems. You can download an AC Transit system pdf map to help you assess  options.

Transit stops are shown on the CalTopo map.

From the San Francisco peninsula: AC Transit Dumbarton Express Bus from Palo Alto (weekdays only), or via CalTrain to Millbrae or San Jose to make connections with BART or AC Transit buses.

From Fairfield, Davis, Sacramento, Auburn: via the Capitol Corridor rail line to Richmond or Fremont.

From San Jose airport: via transit connections to Fremont.