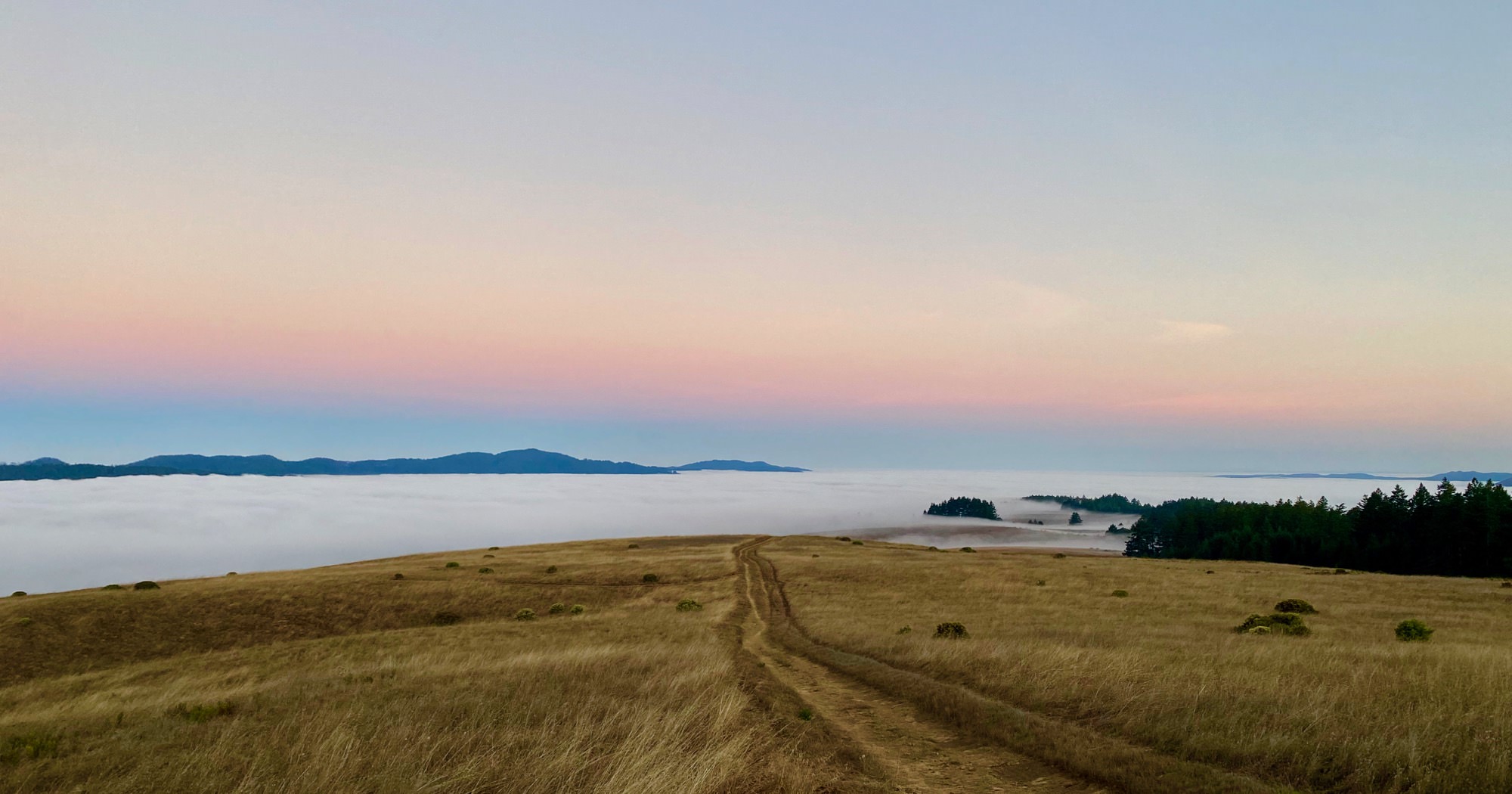 As for all our trips, we used our two favorite mapping tools: CalTopo.com to prepare gpx data, and Gaia GPS while hiking.

September is our favorite month for backpacking in the Sierra Nevada range, however, 2021 was another year of extensive wildfires. In August, the USFS had closed all California National Forests, but later announced they would reopen on September 18th. We secured a permit for September 19, packed our food and gear, made plans with a friend to join us, and were ready to go. Then on September 16, the KNP Complex and Windy fires flared up and filled the southern Sierras with smoke, making a trip to our favorite range of mountains impractical. Overnight we completely switched gears and designed a new route in Marin County, one of the few good backpacking destinations in California that would be reliably free of smoke. Although we were very disappointed to cancel our trip to the Sierras, we were fortunate to be able to spend five days hiking in Marin. 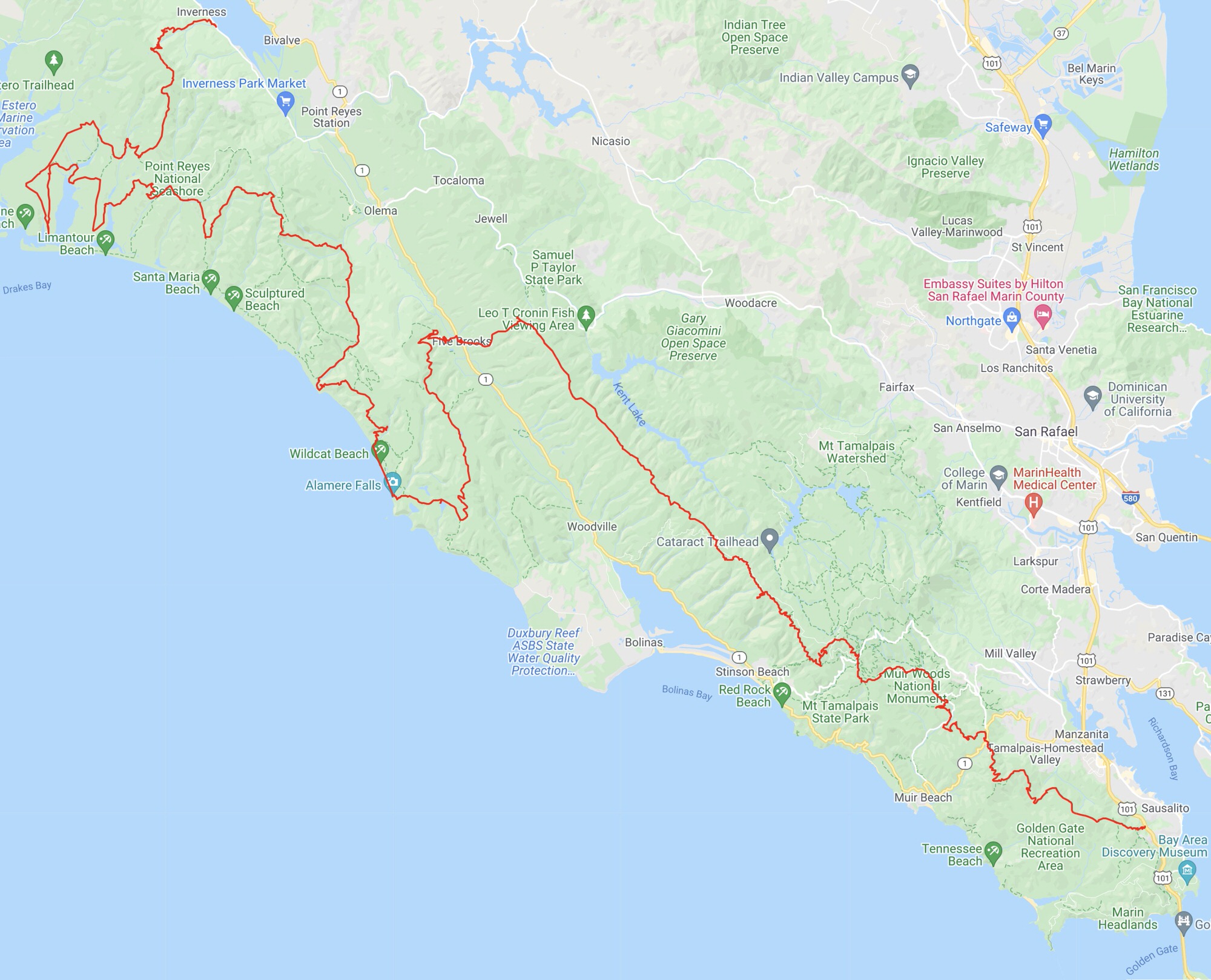 This was another fun and diverse route through Marin County. We had great weather and the usual daily beautiful fog show. Walking out to the end of Drake’s Head at Limantour Estero was beautiful. We walked through Muir Woods National Monument early in the morning, before the parking lot was open and the crowds arrived. We had never been there when it was silent and empty, and that was a special treat. Pelican and Bass Lakes are unusual natural lakes in the coastal ranges, and we had not been to them in a couple years. Having a friend along on the hike made it more fun and more interesting. My only disappointment was that the Sausalito Ferry schedule was severely limited due to the pandemic, and so we ended up returning to San Francisco via a bus instead of the ferry.

I always enjoy trying to create yet another unique backpacking route in Marin. My goal is to repeat as little as is practicable from previous routes. So now we have seven routes, each with some interesting differences and things to see. I enjoyed the walk even though I would have preferred to be in the Sierra. But hiking at altitude in heavy smoke is not fun and the obscured views would have been very disappointing.

We are quite fortunate to live in a place that has a nearby venue for us to take a fine multi-day backpack that can be easily done without using a car.

This particular route was put together with these goals:

To get to the trailhead, we took Golden Gate Transit bus #101 from San Francisco to the San Rafael Transit Center, and then connected with the Marin Transit bus #68 to Inverness. It was a short walk through the tiny town of Inverness to reach the Perth Fire Road, which climbs directly up to the top of Point Reyes Hill, and from there we were on trails for the rest of the hike. The best way to end this hike would be to take the Sausalito Ferry back to San Francisco, but if the ferry schedule is not suitable you can catch a bus from the Spencer Avenue Bus Pad instead: Golden Gate Transit bus #101, #70, or #27.

We stealth camped, using our stealth camping techniques. There are campgrounds, a hostel, and a couple towns on or near the route, as shown on this CalTopo map.

The route from the beach to the top of the bluff an Alamere Falls is quite loose and crumbly. Caution is advised if you attempt this. If you do not want to do this climb, follow the Coastal Path from Wildcat Camp instead of walking south on the beach. Even though the weather was fabulous, there were very few other people out on the weekday trails. Pesky insects were not present.