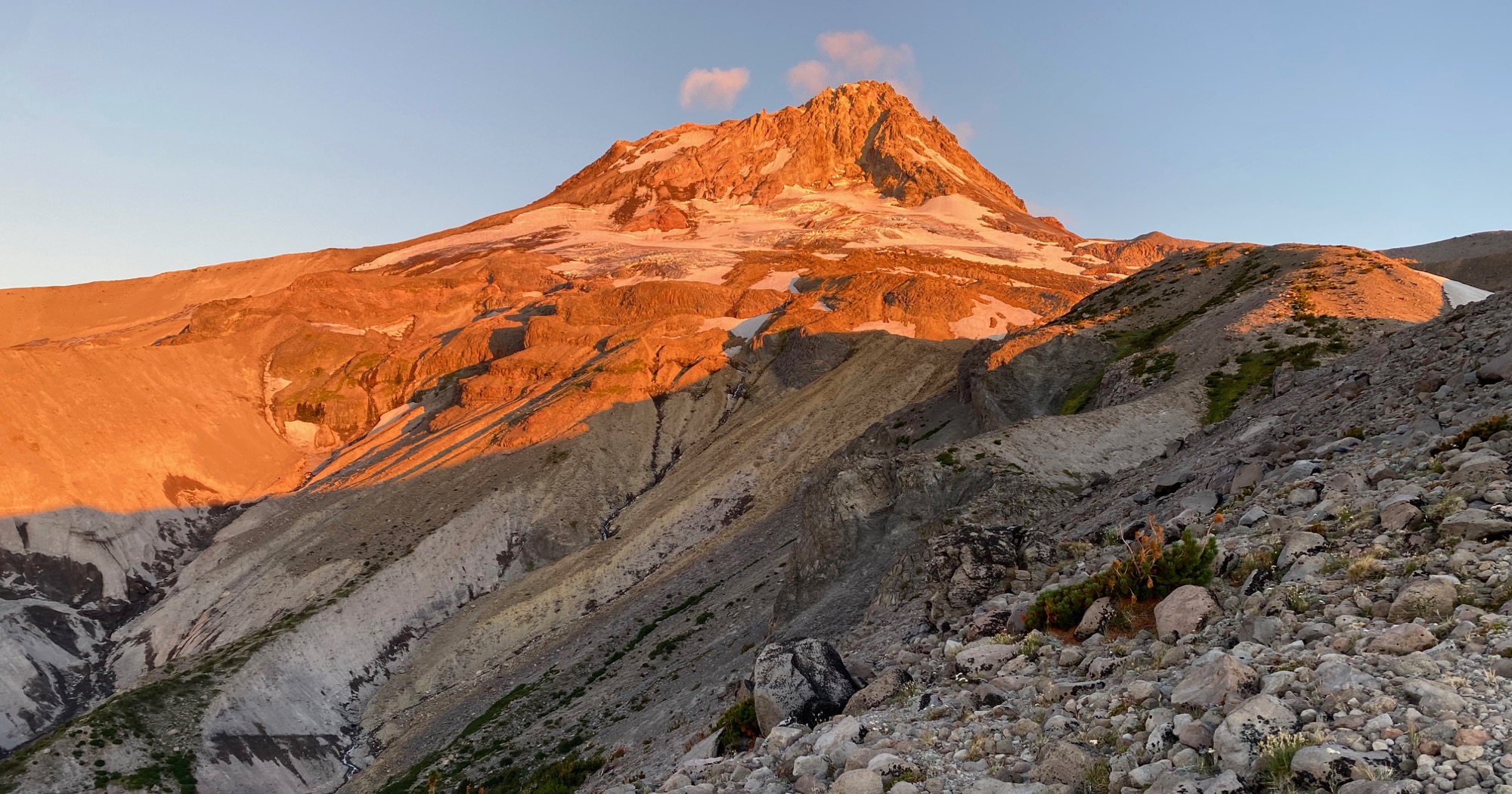 James had climbed Mt. Hood in the early 1970’s and had not been back since, but we have had the Timberline Trail tucked away on our list of possible trips for some time. Mt. Hood is too far from our home to be the only reason to make the drive, so we combined it with a visit with an old friend in Portland and a week of city hiking in Seattle.

The OregonHikers website has excellent information, including printable maps and a concise mile-by-mile trail description.

We used our favorite mapping tools: CalTopo.com to prepare gpx data and printed maps, and two iPhone apps while hiking: Gaia GPS and CalTopo. Gaia GPS has a better selection of available maps, but the CalTopo app has the significant advantage of seamless integration with their website. 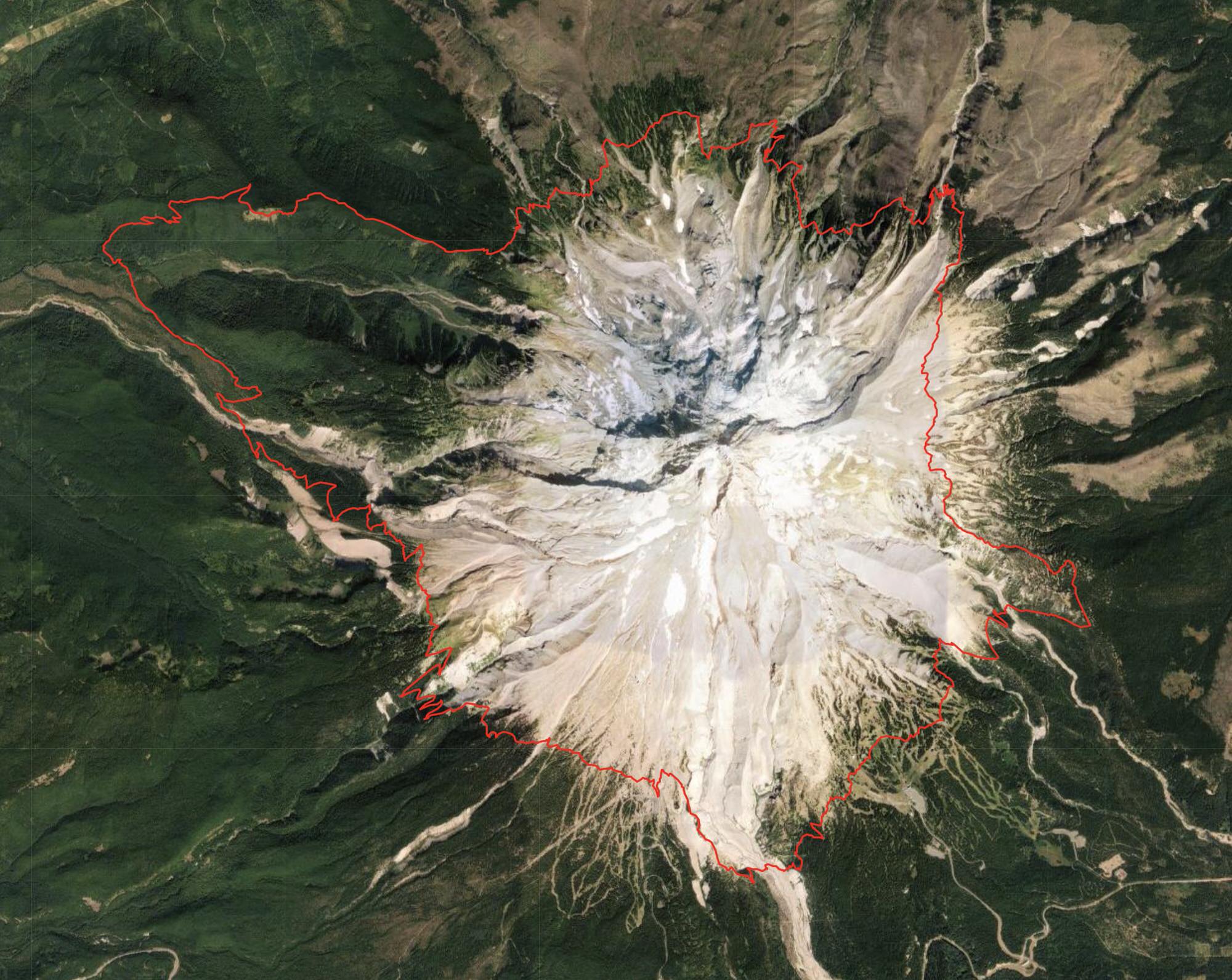 I enjoyed this hike very much. In general, I like diversity both within a hike and across all of our hikes. Mt. Hood is an isolated volcanic peak, so the views and habitat are very different from most of our other favorite hiking destinations.

The entire hike is on trail, so other than a couple of river crossings the hiking was very straight-forward and stress-free. The scenery was very diverse, including views of distant valleys and other volcanic peaks of the Cascade Range, burnt and unburnt forest, rocky slopes, and clear streams surrounded by wildflowers.

I enjoyed this trip a lot more than I expected. Except for some of the stream crossings, this was a very relaxed walk. There was a lot of variety to both the terrain and habitats. The wildflowers were multitudinous and lovely and the bugs were infrequent. Although we had high level smoke during the first day, the following two had perfect hiking conditions. For me, it is quite satisfying to walk around a mountain, getting to see it from all sides and many different perspectives. It took very little re-trip planning and was a fitting contrast and conclusion to the prior week’s urban walks in Seattle.

The Cascades include a number of prominent volcanic peaks. These include: Lassen, Shasta, Mazama (Crater Lake), the Three Sisters, Adams, Baker, Hood and Rainier. Walking around one of these isolated peaks seems like an obvious thing for a hiker to do, but, to the best of our knowledge, a complete loop trail is in place only at the Three Sisters, Hood, St. Helens, and Rainier. At Rainier, the Wonderland Trail is incredibly popular and requires a NPS permit that is very difficult to obtain. The Three Sisters and Mt. Hood loops are on USFS controlled lands and unlimited permits are self-issued at the trailheads. We do not know how backpacking at St. Helens is managed.

Hood’s Timberline Trail (TT) conditions were generally excellent. The route was well signed and easy to follow and the tread was in good shape and dry. According to Caltopo, the total gain for the route we walked was around 10,900 feet.

Downed trees were primarily isolated recent downed trees, except for a couple of stretches where we encountered multiple and frequent blowdowns. Many of these obstacles had use trails around them and none required clambering through tangles of branches. To us, it looked like there had been active tree clearing in some areas, but the trail crews had not yet caught up with all of the trail. One segment of the TT had been significantly re-routed to avoid a mile-long segment where  a severe downburst had uprooted all of the trees and scattered them into a completely impassible mess. The re-route follows a piece of the PCT and is likely just as good hiking as the original route. The re-route is well marked on the ground and is about the same distance and gain as the original TT. The route on our CalTopo map shows the PCT reroute.

The other hazard on this route is the stream crossings. There are many of these and none are bridged. During our trip, we were able to rock-hop some, but were forced to wade others, in one case in thigh deep water. The water in these crossings was fast and cold. The volume of water varies a lot during the season and through the course of a day, as it is primarily snowmelt and glacial runoff. During the spring and early summer, these crossings are likely to be extremely dangerous and not safely passable. We do not know where a hiker can get up-to-date information about current conditions, but perhaps calling the USFS rangers might be helpful. On our walk, we never felt we were taking a significant risk at a crossing, but had the water been a foot higher we would have been unable to make several of the crossings. Some crossings were in the middle of enormous wide and bare out-wash plains, indicating huge volumes of water are present at times. Many, but not all, stream crossings are marked on our Caltopo map.

The TT is a very popular trail and we saw many more people than on any backpacking trip other than along the JMT. Currently, there are no capacity limitations imposed by the Forest Service. Saturday was particularly busy with many day hikers and runners entering from multiple trailheads. The people we encountered were universally friendly and polite. We saw no signs of bicycles or horses. If possible, it would be best to avoid weekends entirely.

Locating a good campsite can be a problem for a couple of reasons. First, there are many backpackers seeking a limited number of sites. Second, much of the terrain is either heavily vegetated, sloping, or both. We saw few if any viable sites that were not already cleared as campsites; many of these established “scrapes” were next to the trail and clustered into closely situated group camping areas. Do not expect solitude when you camp. Some, but by no means all, existing campsites are marked on our Caltopo map.

Finding clean sources of water was not an issue and we never carried more than a liter. Fires are not permitted. When we were there, daytime bugs were not problematic. We saw no advantage to hiking the loop in one direction of the other. The TT can be accessed from numerous side trails, each with its own parking. Most of these require a special overnight USFS permit for leaving a car. Free overnight parking is available at Timberline Lodge, but not all lots permit overnight parking. We parked near the Lodge, and when we departed mid-day Saturday the very large parking lots were jammed full, another reason to avoid weekends if at all possible.