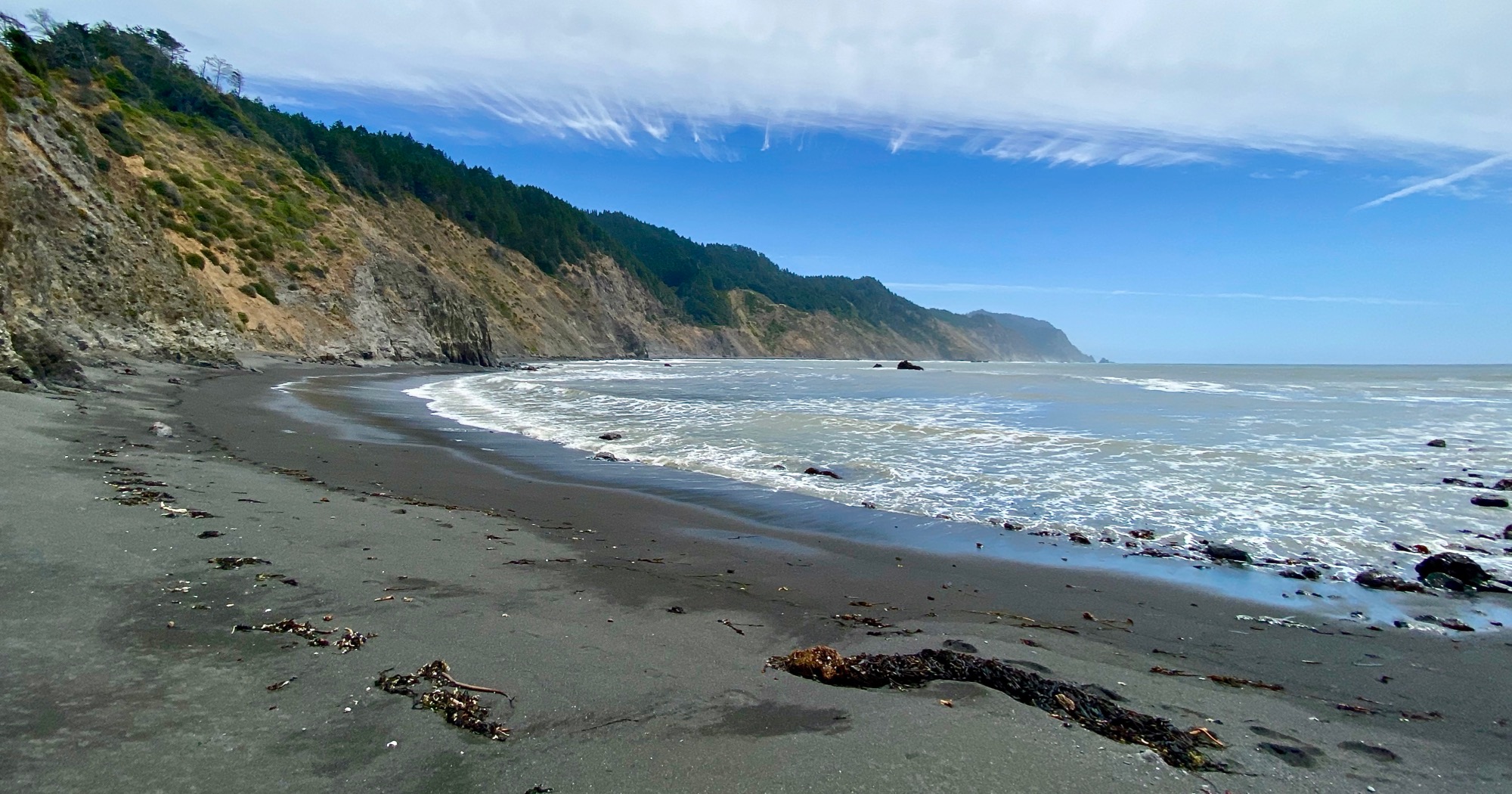 The Sinkyone Wilderness State Park website has all of the necessary information about permits and trails.

In June of 1984, we hiked a fifty mile loop south on Lost Coast Trail and returned via the crest of the King Range on our second multi day backpacking trip together. Hiking the other piece of the Lost Coast, which is south of Shelter Cove, has been on our list for a long time. On our Northern California Bike Tour, we had ridden the Usal Road so we had a bit of familiarity with the area.

Our travel options were still somewhat limited due to the pandemic. We wanted to get out of town, and this destination met all of our needs: pleasant weather; no or few biting insects; a reasonable driving distance; good scenery; easy logistics; and some trails that would be new for us. 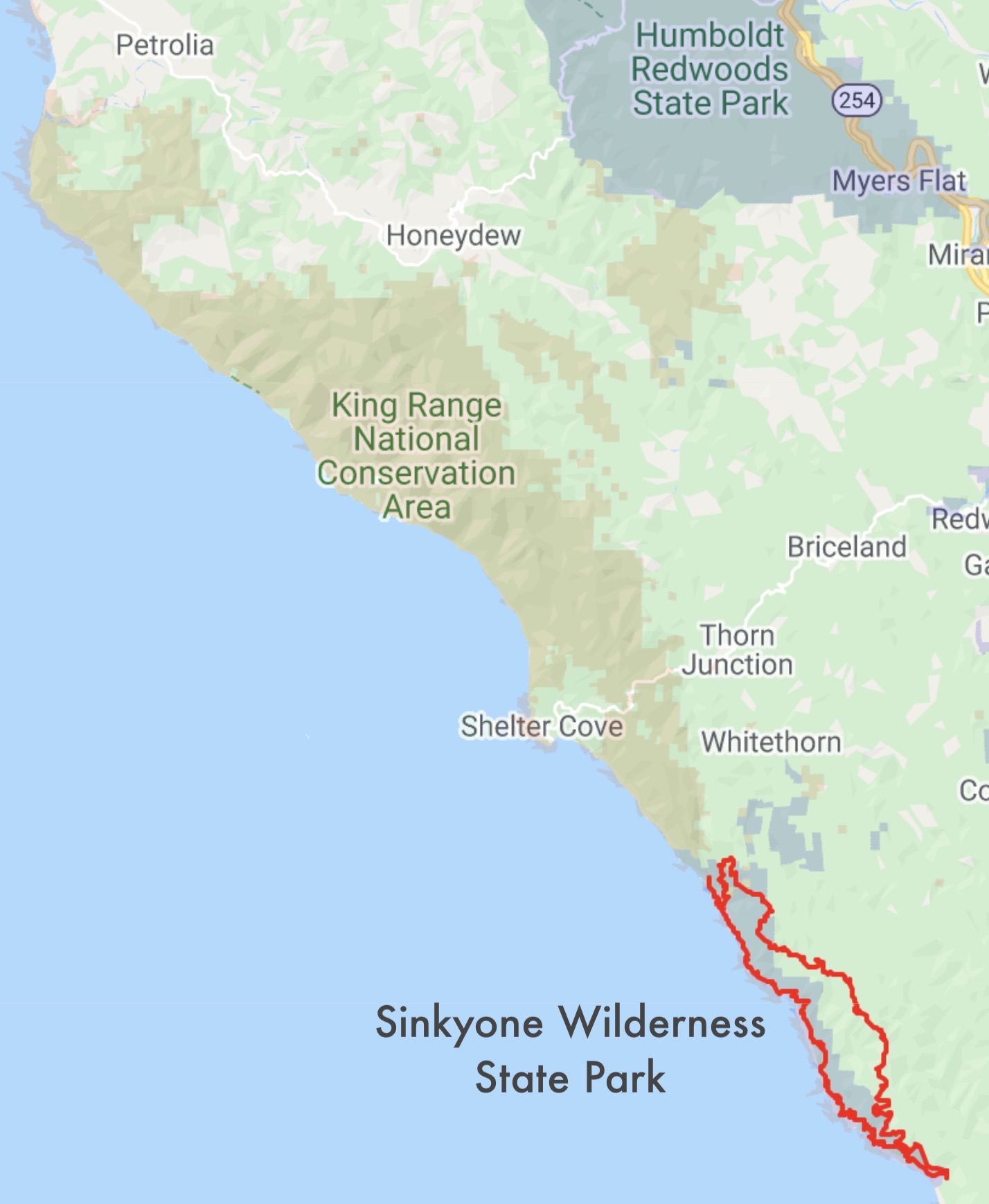 This was a solid 3.5 star hike. The views of the coast are magnificent, and visits to several beaches were also stellar. We had perfect weather: high temperatures around 60º and low temperatures of 45º-50º. We did not have any fog.

Our most memorable moment occurred while eating lunch on Jones Beach. A River Otter came out of the surf and frolicked in the sand for a minute before returning to the surf.

Although aspects of this hike were 5-star quality, there are a few things that detract.

The best places on this route are Bear Harbor Beach, Wheeler Beach, and the ~1 mile section between Jones Beach and the Visitor Center. It is rare that the best scenery in a park is within a mile of the road, but in this case I think it is.

Sinkyone is an excellent backpacking destination for those who have very limited range, for example families with small children or novice backpackers. There are a dozen campsites within one mile north from the visitor center where the scenery is five-star and the trail quality is perfect. There is one campsite at the Visitor Center itself that includes access to an old barn building; staying here during a winter storm could be magnificent, although the steep dirt access road could be problematic when wet.

This was an extremely simple trip to put together. The five-hour drive from home was easy. We had great weather, The coastal scenery was excellent, but the interior, while pleasant, was not particularity memorable. The lack of trail maintenance detracted from what otherwise would have been a very pleasant walk. We saw very few other people other than at the Ranger Station and at Usal beach. It is always good to get out, and for those willing to put up with the limitations of the walk, I believe it is worth doing, if for no other reason than to be able to walk a roadless section of the coast.

There are only two pieces of the Pacific coast in all of Oregon and California where there is not a road within a half mile of the water: parts of Point Reyes National Seashore and the Lost Coast. The lack of a road makes these places very special.

The Lost Coast is in southern Humboldt County and northern Mendocino County. The small coastal community of Shelter Cove is at the midpoint of the roadless section. The northern ~70% is in the King Range National Conservation Area (KRNCA), managed by the BLM. The remaining ~30% is in the Sinkyone Wilderness State Park and adjacent InterTribal Sinkyone Wilderness.

The Lost Coast Trail runs from the Mattole River to the Usal Creek, crossing the entire KRNCA and the entire Sinkyone Wilderness State Park. When most people refer to the Lost Coast they are thinking of the area north of Shelter Cove. The area north of Shelter Cove is now extremely popular, heavily used, and requires advanced reservation permits that apparently can be difficult to obtain.

This trip report is about the lesser-known part of the Lost Coast Trail well to the south of the popular section.

The vast majority of the Lost Coast was logged. The Sally Bell Grove in Sinkyone is the site of an historic multi-year battle to protect one of the few remaining coastal groves of old-growth Redwoods. That grove was ultimately protected after numerous lawsuits, and those lawsuits formed the foundation for subsequent efforts to protect old-growth forests. These two articles provide a brief history of the battles: The InterTribal Sinkyone Wilderness and Legendary Landmark – EPIC v. Johnson Turns Thirty.

The three mile dirt road from Four Corners to the Needle Rock Visitor Center is graded but steep. When wet it is probably not appropriate or safe for a standard 2WD vehicle. Most of the road is quite narrow with few places to pass on-coming vehicles.

A day use or overnight permit is required and can be self issued at Needle Rock Ranger Station. Cash or checks are accepted for payment.

The entire route is on trail or dirt road. The trail section between Wheeler Beach and Usal Beach is passable but not well maintained and is not appropriate for hikers uncomfortable on steep loose surfaces. The tread is worn or missing in places on steep grades and care must be taken to prevent slipping and sliding. The trail is also partially to mostly overgrown in most of the areas that are not in the woods. While it is still passable, in another year of two, it may be quite difficult to get through the vegetation. There are numerous fallen trees blocking the trail that must be scrambled over, under or around. It appears there has been no significant trail maintenance for many years.

The trail between the Needle Rock Ranger Station and Wheeler has some of the same problems, but to a much lesser extent.

Usal Road is open to vehicles but is a very rough ungraded road that is only used by recreational dirt motorcycles or high clearance 4WD vehicles. We spent an entire day on it and saw only two motorcycles, however it is probably best avoided on weekends and holidays when it may be busier. Both Hotel Gulch and Timber Haul Roads are closed to private vehicles.

The portion of the coastal trail between Needle Rock and Usal Beach is mostly within audible distance to the coastline and frequently within visual distance. The trail climbs and descends numerous steep forested ridges. In the valley bottoms, there was always a creek and usually a spur trail accessing the beach. The views are often superb. Some first and second growth Coast Redwoods are encountered along the way.

We were there in June after a very dry winter. All of the permanent creeks marked on the USGS maps were flowing. We did not encounter any usable surface water while walking along Usal Road.