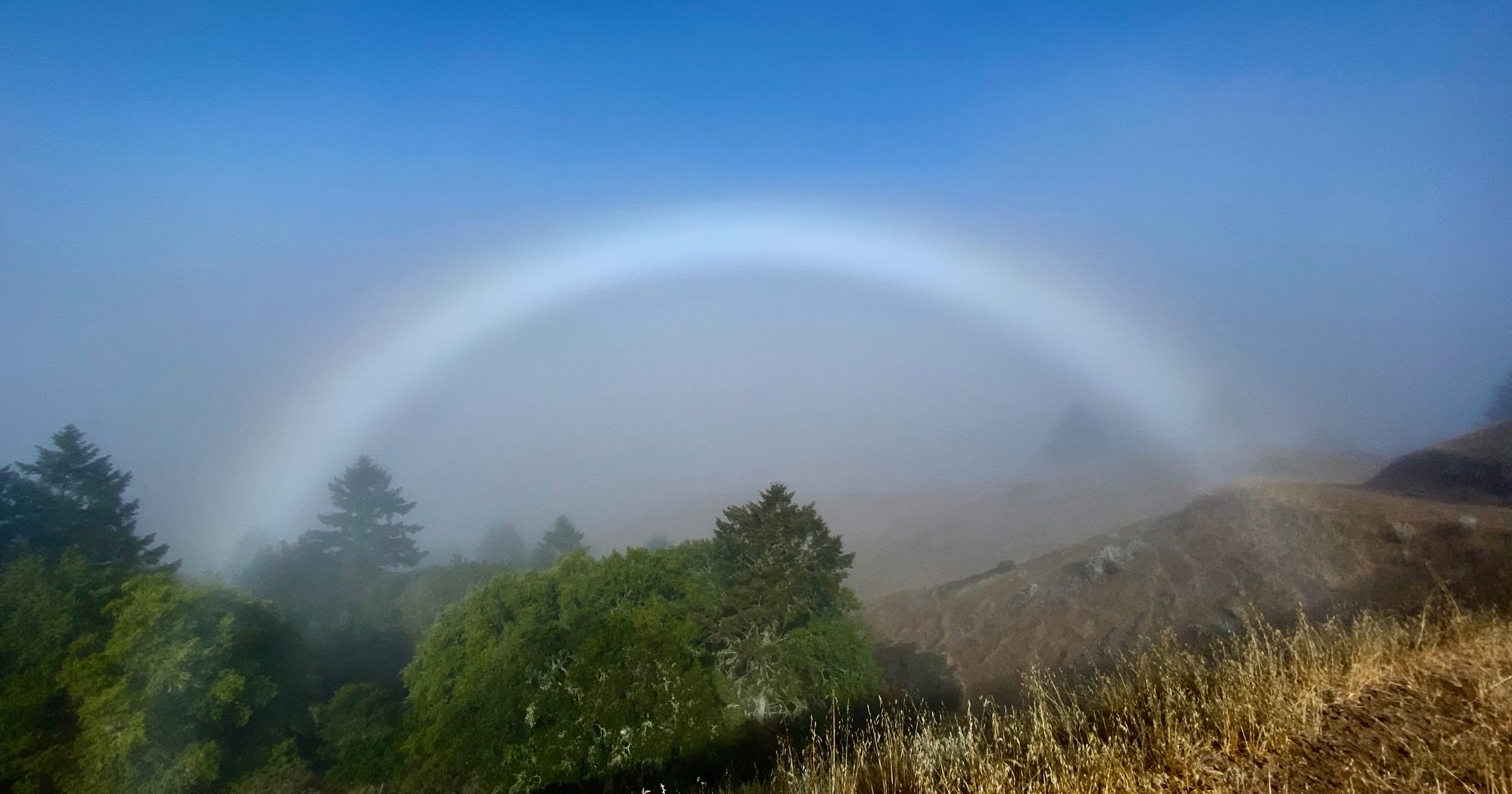 As for all our trips, we used our two favorite mapping tools: CalTopo.com to prepare gpx data, and Gaia GPS while hiking.

We have taken numerous multi-day backpacking trips in Marin County, and continue to love its scenic beauty and habitat diversity. The extensive trail network through public lands means we can still create routes that includes trail we have not previously walked. We are now vaccinated, and the Bay Area COVID-19 rates are low enough that we are comfortable being out and about locally. We were desperate to get out, but our options were limited as many of our favorite destinations were currently not available to us: travel out of the country is problematic due to the pandemic; it’s mosquito season in the mountains; it’s too hot in southern Utah. A five day outing to Marin County was perfect, and using public transit to reach the trailheads makes logistics easy.

We publish this as a stand-alone trip report as it has been a number of years since we last backpacked in Marin. 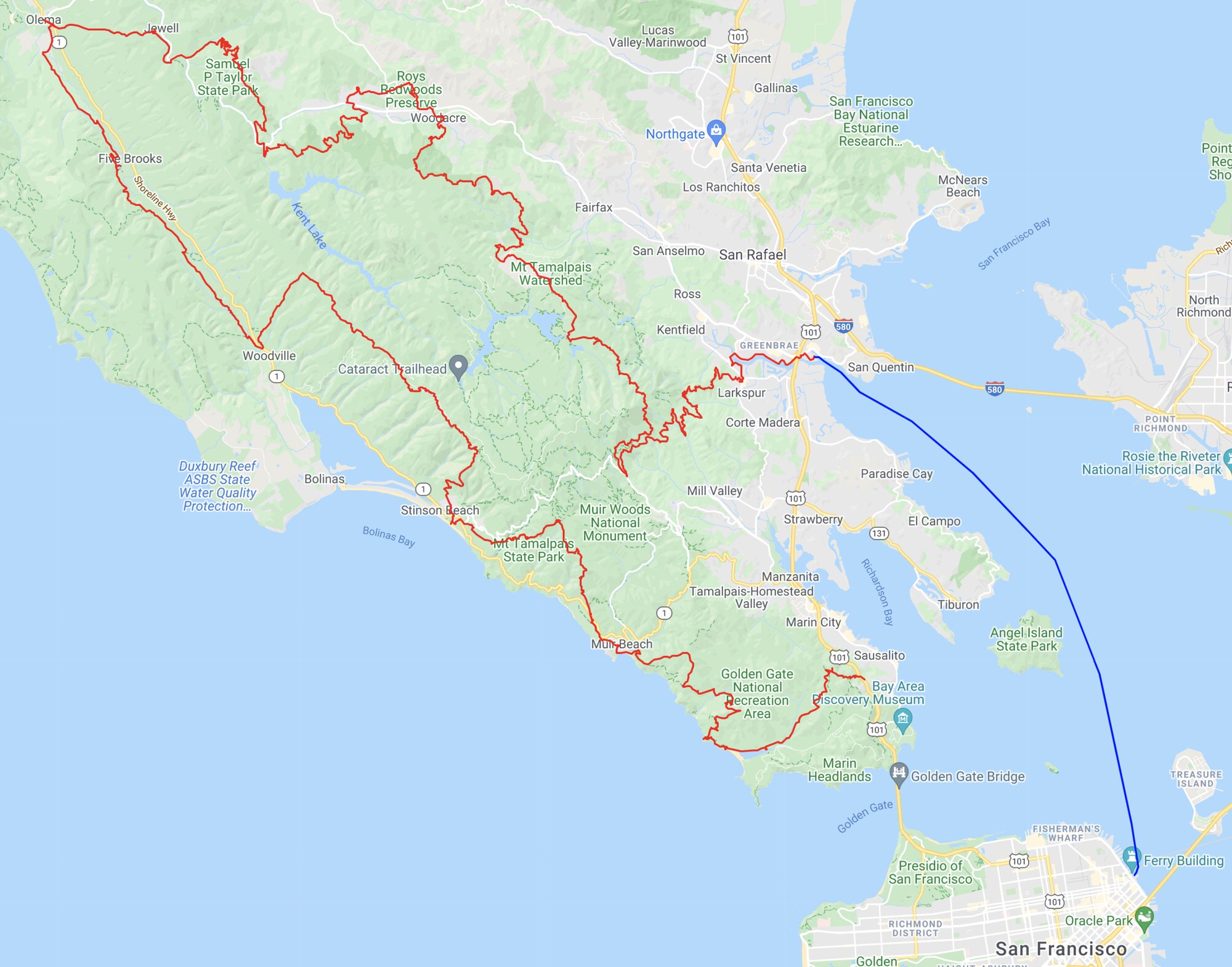 As with all previous day hikes and backpacking trips in Marin County, this one was fabulous. We had great weather with mild temperatures and the expected daily beautiful fog show. Getting prepared food from restaurants or deli counters on four of the days was luxurious. We are fortunate to live in a place with great backpacking available via public transit.

We have been hiking in Marin for forty years and so far I have never gotten tired of the place. There are still some trails we have not yet walked and that provided an excuse, if one was needed, to go back again. This trip combined some of these new paths and some old favorites as well. Fortunately we had fabulous weather: not too hot, with clear blue skies in the inland areas and high and low fog along the coast providing a fine show.

We designed this route to make use of public transit, to explore a few trails we had not previously walked, and to visit diverse habitats and multiple hilltops. We realized with minor route tweaking we could include four restaurant/deli meals and decided to make use of that opportunity. Marin has a very extensive network of trails, and this specific routing was optimized to meet our particular goals of this trip.

To design the hike, James entered the routes of our previous Marin backpacking trips and our Marin 20 mile day hikes into Caltopo. With a bit of effort, he was able to create a coherent walk that included miles of trails we had not previously walked, or in some cases had not walked in the past several years.

We began our walk around 8 in the morning after a beautiful ferry ride from San Francisco to Larkspur. Normally we would have returned to San Francisco via the Sausalito Ferry, but instead caught a bus north from the Spencer Avenue bus pad in order to visit a friend living near Sebastopol. We recommend confirming the current ferry schedule just prior to using it as service has been irregular during Covid times.

The route includes fine viewpoints from the summits of Pilot Knob, White Hill, and Barnabe Mountain. If you wish, short spurs lead to additional great views from Hill 88, the Muir Beach Overlook, and the bench at Cardiac Hill.

There are many public water spigots on the route. Given the current drought in Northern California, there was also a surprising amount of flowing surface water in the many streams we crossed; that water should be treated before use.

There are public campsites and B&B accommodations listed in the Resources section of the article: Marin County: Four Backpacking Trips. We chose to illegally stealth camp each of our four nights, following strict stealth camping protocols. We do not include our sites in the CalTopo map, however a skilled hiker should be able to find discreet places to camp by studying topo maps and satellite imagery.

We had no insect problems except for some annoying flies on the grassy hillsides of the Coastal Trail south of the Bolinas-Fairfax Road.

The only time during our walk that the trail was somewhat crowded was on Sunday afternoon while climbing the very popular Dipsea Trail between Stinson Beach and Pantoll. The beach at Stinson was being well used by happy groups of people out enjoying a beautiful day on the water.