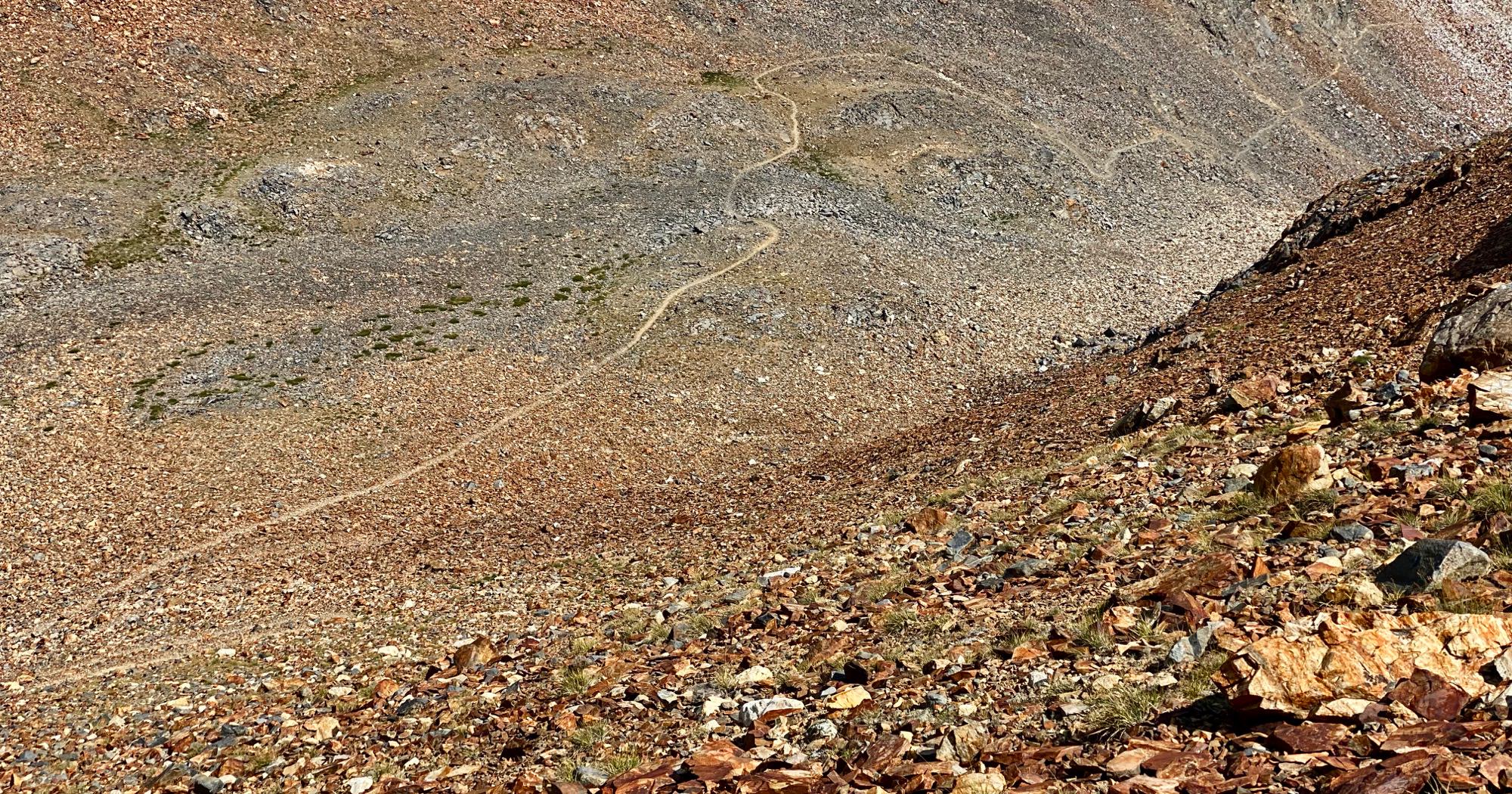 We try to get to the Sierra Nevada at least one a year and visit some peaks, passes, and high basins unfamiliar to us. While we had hiked some portions of this route previously, much of it was new. This trip was designed to both visit unfamiliar places and to walk as a loop to avoid hitching a ride between trailheads.

The National Geographic Mammoth Lakes Mono Divide map covers the route but at a scale not sufficient for cross-country travel.

An Inyo National Forest over-night permit is required and can be booked on Recreation.gov. 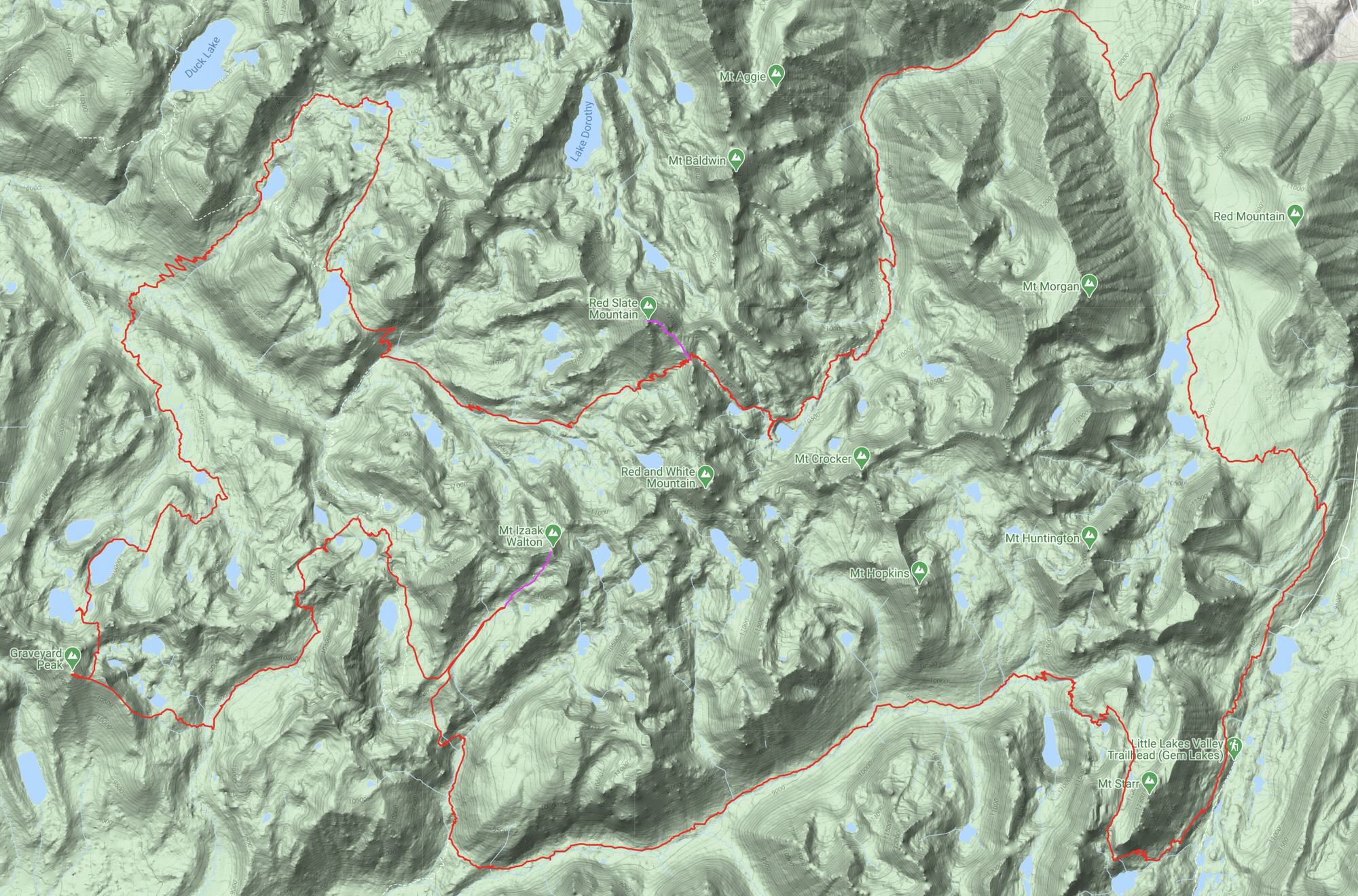 My favorite places in the Sierras are the glacially carved white granite basins between about 10,000 and 11,000 feet of elevation. At this elevation there are spectacular lakes, open meadows with beautiful creeks, and glacially polished white granite slabs. There are a few trees to make the scenery interesting, but not so many trees as to block the views or impede my sense of space. Walking off-trail through these basins is usually very easy. Elevations below about 9500 feet are generally more heavily forested. The ridges and peaks above about 11,500 feet are usually rugged and rocky; they provide a beautiful visual backdrop to the basins.

Whereas James loves the challenge and exhilaration of climbing peaks, I prefer to spend most of my time walking where the footing is straight-forward so I can look around and enjoy the scenery. My favorite hiking in the Sierras is into the high basins I just described. This hike included very gratifying walks into the following basins:

Our route included the very northern edge of the region often referred to as the Southern High Sierra, where these high granitic basins are at their best. The southern leg of our route was along Mono Creek, through the region called Mono Recesses; that is classic Southern High Sierra white granite scenery. The northern section of our route crossed McGee Pass between Red Slate Peak and Red and White Peak in an area of volcanic and metamorphic geology that dominates in the Mammoth Lakes area. This contrast in rock types is evident in the photo gallery.

While I much prefer the white granite, it is always gratifying to have scenic diversity in any trip, and red slate was fun for that reason. Also, on our final day we walked for a few hours at elevations between 8000 and 9000 feet on the steep dry east slope, and that habitat diversity added an interesting element to the route.

We are lucky to have the Sierras so close to home where we were able to seek relief from the various stresses of 2020.

Yet another in a long list of very satisfying Sierra walks. This one was extra special as it gave us a chance to get away from all the Covid troubles everyone is living through. The walk had a lot of interesting geologic diversity, more so than in many areas further south. The red slate scree piles are quite beautiful and surprisingly easy to climb. It was fun to bag a couple more summits. As is generally the case, the Sierras are an extremely gratifying place to backpack, with gorgeous peaks, basins, and mountain lakes and solitude easy to find.

This route is a combination of on and off trail hiking and includes the opportunity to climb a few SPS peaks; James summited Mount Izaak Walton and Red Slate Mountain.

We were fortunate to complete our hike just five days prior to the start of the Creek Fire that burned extensive areas to the west of where we walked; for many weeks that fire created unhealthy and unsightly levels of smoke throughout California and the Forest Service closed both Sierra and Inyo National Forests. While we were hiking, we did have some smoke from other California fires, but it was never a significant problem.

The 2019-2020 winter had been quite dry with the snow-pack far below normal. Even so, finding water was never a problem. Fortuitously, the dry conditions meant that there were no mosquitoes.

While we saw numerous people on the trails, particularly on the short pieces of the John Muir Trail (JMT) that we walked; we saw no one on our cross country segments.

Except for the off-trail segment from Upper Graveyard Meadow to Anne Lake this route is quite suitable for moderately experienced backpackers.

Disclaimer: Do not rely on our exact tracks for your route; use skill and common sense. We strongly recommend that anybody engaged in cross-country travel in the Sierra use RJ Secor’s book for more detailed route descriptions and difficulty levels.

Mt. Izaak Walton. The walk up the extremely beautiful unnamed valley southwest of the peak is quite easy. The climb to the summit is straightforward class 2 and the view from the top is good.

Silver Peak. The standard route up Silver Peak is to approach from the southwest but that did not fit into our itinerary. Our plan was to ascend from the end of the Upper Graveyard Meadow Trail to Graveyard Peak via its southeast ridge over point 10,838, and then follow the top of the Silver Divide Ridge to Silver Peak. We could find no information about traversing the Silver Divide itself, but after looking at satellite imagery, we thought that we might be able to pull it off. However, when we reached the point just below Graveyard Peak and were able to see the top of the Ridge to the north, it was quickly apparent that a traverse would be more difficult than anticipated, so we abandoned the attempt. Retreating back down the ridge to an an unnamed class 2 col, we descended to the uppermost of the Graveyard Lakes. From there, we crossed the Silver Divide via another unnamed col and descended to Anne Lake. The drop to the lake is class 2, but requires careful route finding to stay on non-technical rock. The basin around Anne Lake is as nice as any in the Sierra.

Ram Lake Basin. Leaving the JMT at Purple Lake, we followed an old trail up into the very attractive Ram Lake basin. The following morning we followed an extremely satisfying and technically simple cross-country route back to the JMT near Lake Virginia.

Red Slate Mountain. This was an easy, mostly class 1, climb from Mono Pass.

McGee Creek Trailhead to Rock Creek Trailhead. Due to the Corona virus we did not want to hitchhike between trailheads. In order to make a loop, James mapped a traverse between these two trailheads that made use of some old jeep tracks, trails, and some very short pieces of cross-country travel. The route was all easy walking, and it was fun to visit the dry east-slope habitat that is quite different from the rest of the trip.