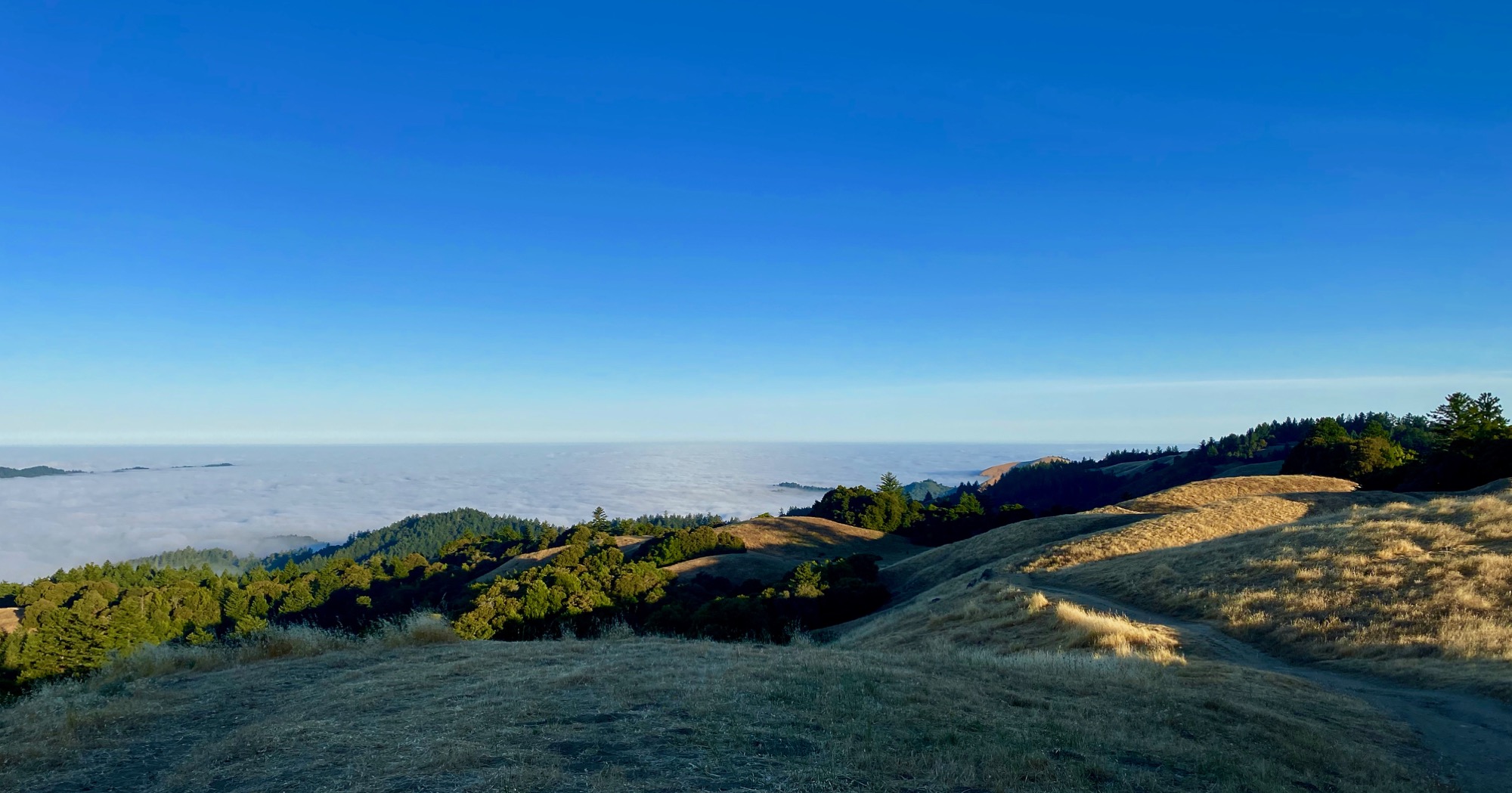 The Midpeninsula Regional Open Space District has useful maps of their preserves.

Bay Area State Parks had been closed to overnight travel as part of the COVID-19 shutdowns. We took this trip shortly after some of the parks reopened and it provided a route we could walk from our home to the ocean without getting into vehicles with other people. Although we have previously taken numerous local backpacking trips using public transit, this was the first trip where we started our hike at our front door. We did this partially because the public transit agencies requested that buses be used only for essential travel, and because we are avoiding being in private vehicles with other people. It was a satisfying experience to take the entire trip on foot. This was our first overnight trip since the start of the pandemic and it lifted our spirits to spend five days out on the trail.

This document is written assuming that the park trail access relating to Covid-19 has returned to normal. 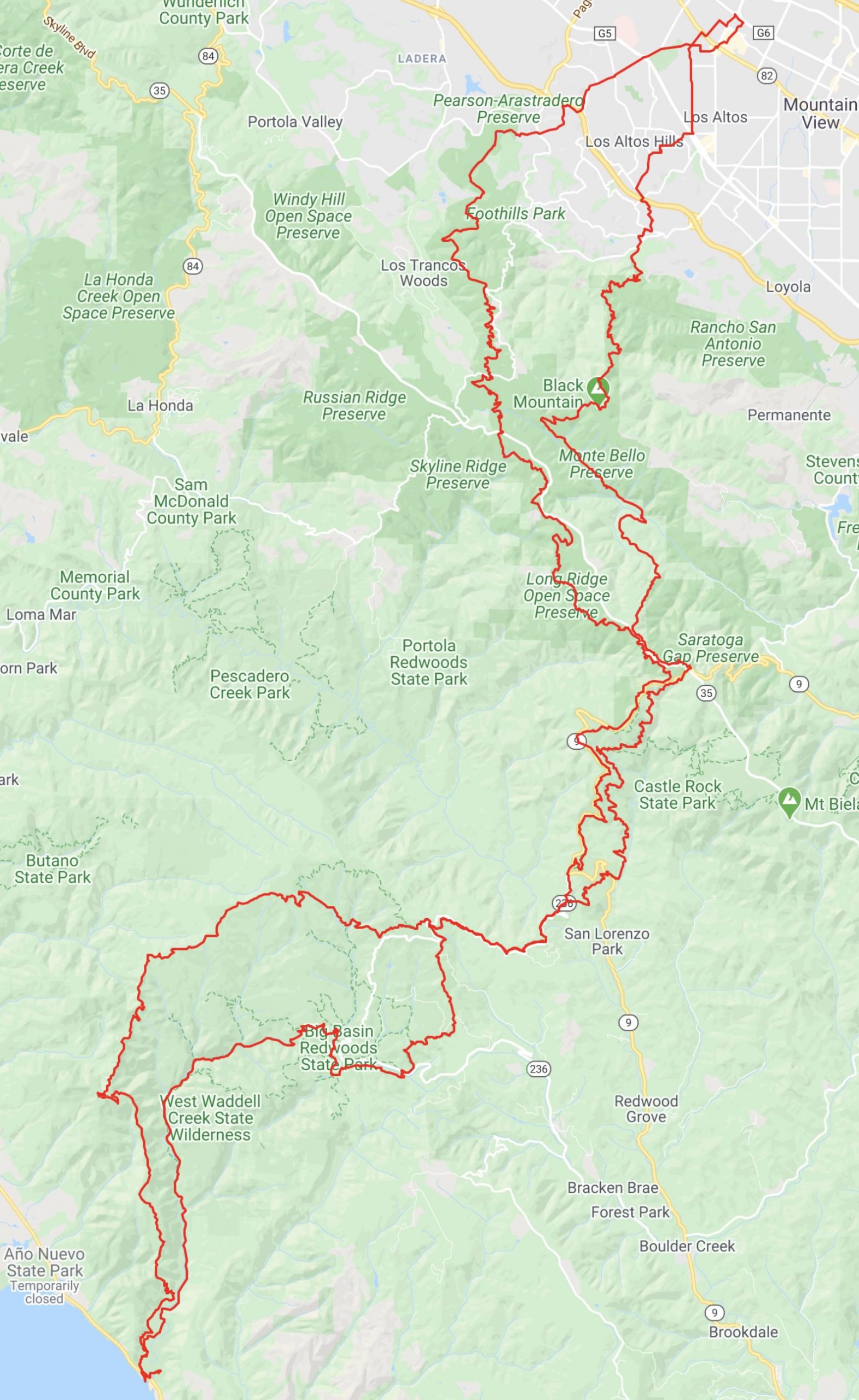 We have taken many backpacking trips in the Santa Cruz mountains close to home. This one was unique in two ways.

First, we walked from home, rather than taking a bus or driving to a trailhead. This was both emotionally satisfying in concept, and practically fun because it added to the diversity of the trip.

Second, we started the hike on day #97 of the Santa Clara County “Safer at Home” restrictions on activity. By this time we were internalizing the reality that it may be one to two years before we will be able to enjoy low-risk travel like we have in the past, and we were trying to navigate the new reality. Getting out for five days of hiking was particularly good for my psyche.

This was a generally satisfying walk for me. We had already canceled a couple of previously planned backpacking trip due to Covid, so it was quite good to get out on an overnight again. I found it reassuring that after a long hiatus from doing multi-day trips I could still keep up a reasonable pace carrying a pack.

There were two negatives on this walk. The first was the unexpected mosquitoes that prevented us sitting outside the tent during the evening hours, which we both enjoy. Having them around was quite a surprise as the Bay Area usually does not have significant insect issues to deal with. The other problem was the noticeable traffic noise from Highway 9 as we walked the portion of the Skyline-to-the sea Trail near the road. If Pescadero County Park had been open, we could have done a loop that avoided the area, so the issue isn’t integral to the route itself.

The route itself is quite nice: convenient, with a reasonable amount of diversity including open grasslands, some old growth Redwood groves, the interesting Chalks area, a wide sandy beach, and shady creekside trails. There are a number of quite fine viewpoints along the route, with vistas extending as far south at the Santa Lucia Mountains of Big Sur. And for me, I found it quite gratifying to put a pack on at home and take off on an interesting multi-day walk.

Our 2020 trip was a variation on a similar walk we took in late November of 2005; both routes are shown on the CalTopo map.

In 2005, instead of starting the hike from our home, we got a ride to the Rhus Ridge trailhead in Rancho San Antonio Open Space Preserve, and at the end of the trip we got a ride home from Palo Alto’s Arastradero Preserve. On this trip we found walking through the urban areas to be quite satisfying; very little of it was on busy streets, the walk passes through several parks, and it makes use of the extensive Los Altos urban trail network.

Although we did not do this on our walk, from the Caltrain station it is only a few extra miles to walk over and start at the San Francisco Bay. One possible Bay-to-Sea route alternate is included in the Caltopo map.

On our 2005 hike we hiked to the coast via the Toll Road and returned via the Slate Creek/Ward Road route. This year, some sections of the Slate Creek/Ward Road route were closed due to COVID and in order to respect that closure we followed the StS instead. This route through Pescadero County Park is quieter and is also a bit more satisfying than our 2020 hike because it forms a true loop with no repeated segment. In summary, combining the Toll Road with the Slate Creek option creates a fine loop that avoids the noisy StS.

The only downside to the 2005 variant is walking a few miles of coastal Highway 1, but if the tide is down, a lot of that can be done on the beach instead of the pavement. The road has a lot of traffic on weekends, but is not bad the rest of the time. To avoid walking along Highway 1, one could also take the Westridge Trail from the Waddell Creek Ranger Station up to Chalk Mountain and rejoin the 2005 route.

There is no overnight parking available at the trailheads on the bay side. It is apparently possible to arrange overnight parking at the Waddell Creek Ranger Station on the ocean side, so you could do the walk in reverse: start at the coast and go up and over Skyline Ridge and down to the Bay side and then return.

An easier solution is to take Caltrain to the San Antonio Station and start and finish your hike there. It is possible to reach the Caltrain station using mass transit from almost anywhere in the Bay Area. We live reasonably close to the station and so we simply started walking from our house.

We chose to stealth camp instead of using the various public campsites along the way. We prefer the solitude of stealth camping, and the ability to stop walking when it suits us. However, it is against regulations in all of the park jurisdictions, so if you choose this option, you do so at your own risk and must follow all stealth camping protocols. In particular, the use of fires, stoves, or matches is completely unacceptable when stealth camping.

Finding good stealth sites was usually not an issue, although there are stretches of the route where camping is impossible due to steep terrain and heavy undergrowth. Although we have never tried it, using hammocks might be an effective solution for making a camp on this walk.

If you choose to use the official sites, you will have to follow a predetermined schedule and make the required reservations with a variety of state and local agencies prior to starting the walk. You cannot legally use the backcountry sites on a walk-in basis.

Once you leave the lowland suburbs, the only food you can buy on route is at the tiny shop at Big Basin Headquarters. Selection is extremely limited so don’t depend on this shop to fill out your pack. On the 2020 route, you will pass several large grocery stores and many restaurants while walking through Palo Alto, Mountain View and Los Altos.

Our CalTopo map identifies a number of water sources found along the way. The natural sources we have marked are generally reliable year round, although in a serious drought year, some of them may dry up. There would be numerous additional sources if hiking during the rainy season. Most of these sources are streams and the water should be treated before use.

On our June 2020 walk, once we crossed Skyline Ridge we had surprisingly large numbers of mosquitoes at our campsites. They were not an issue when walking, but if we stopped for too long, we were swarmed. Once we reached our campsites we set up the tent and quickly retreated inside, protected by the netting.

We had no insect issues during our November 2005 walk, nor on any of numerous other day and overnight hikes in these hills. We do not know know the timing the mosquito season.