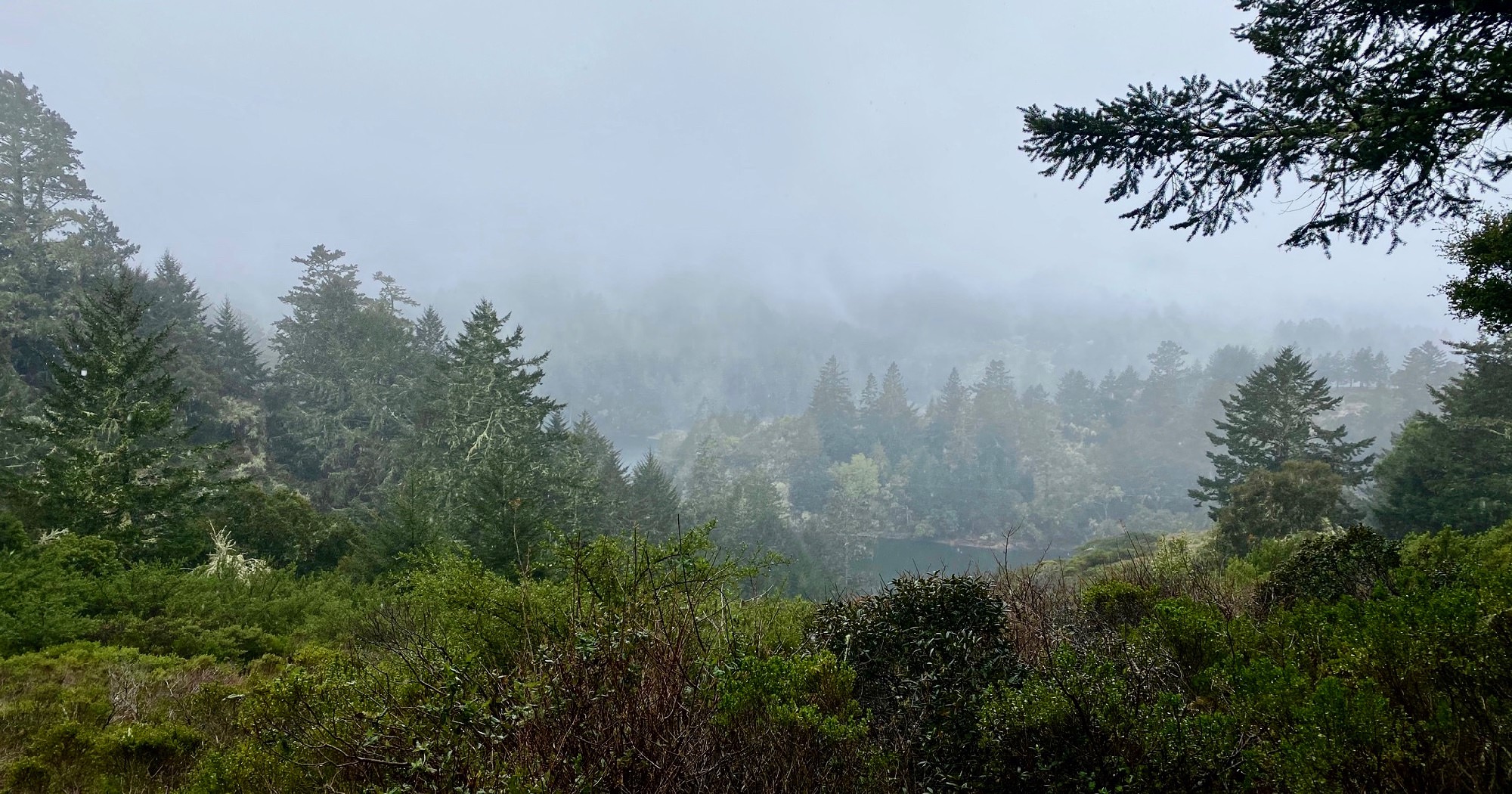 The San Francisco Public Utility Commission owns 23,000 acres of watershed land in San Mateo County that forms a significant visual backdrop on the western skyline of the San Francisco peninsula. The ridgeline is not open to the public, however, they do have a special program where volunteer docents can escort visitors on hikes in that area.

We have walked along the edges of the watershed numerous times in the many public open spaces adjacent to it, but had never tried to visit the watershed property itself. For the past couple of years, we have been making an effort to hike local trails we had never visited, and it was past time to try this one. 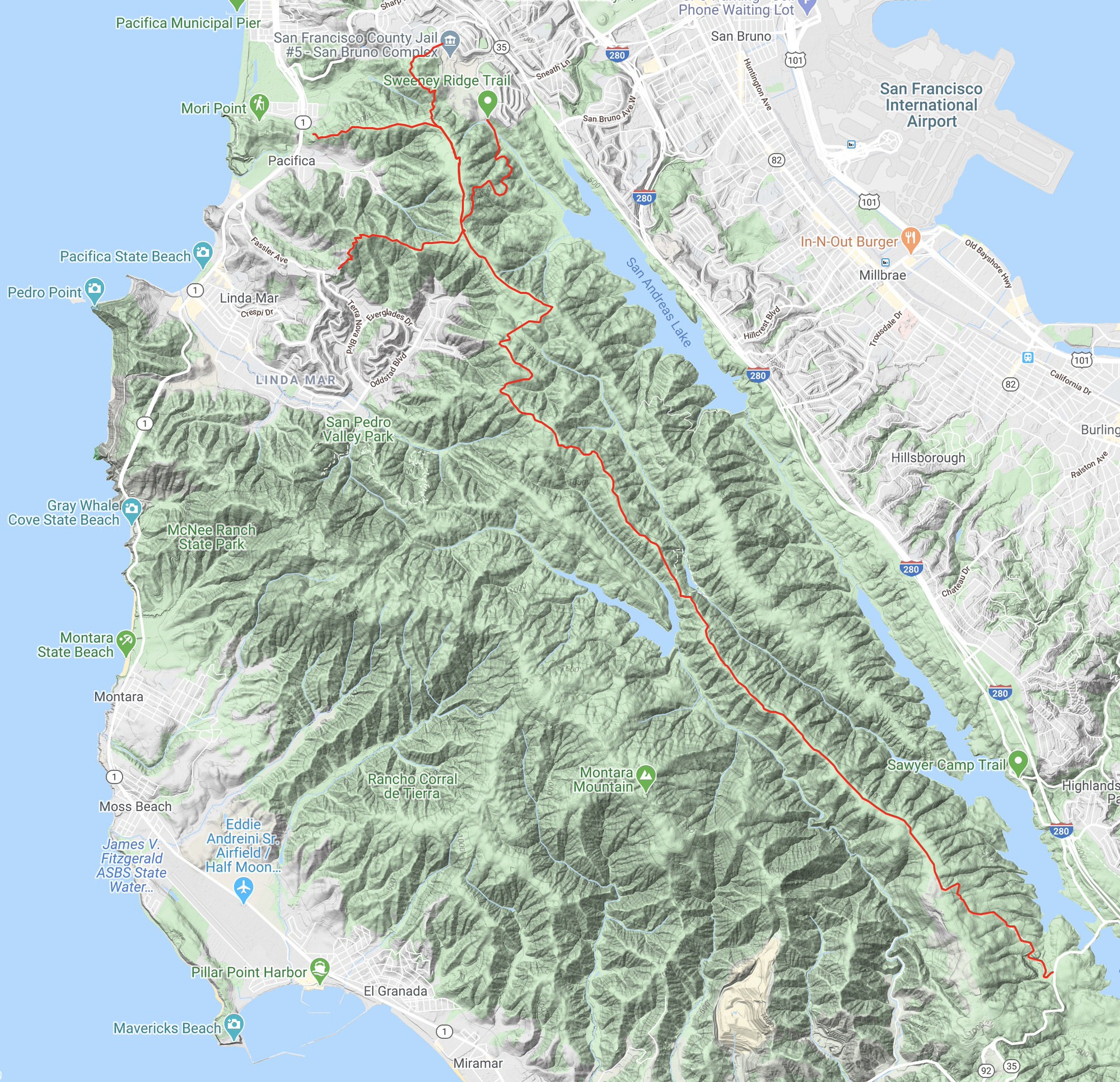 Thanks to our friends Curt Kiest, Dan Clark, and Dave Shayer for providing the photos.

This walk was easy and beautiful with terrific scenic diversity. It was particularly interesting to walk along a ridge that I have seen from afar for decades. Our group of friends agreed to make it an annual outing and I look forward to returning year after year.

We have not normally included write-ups for individual day-hikes on this website. However, because this walk is so unusual and not well known, I thought we should add it. Hopefully others will be encouraged to try the walk and this may help help create a constituency for advocating opening up more of these lands to public use.

I found this to be a fabulous day hike. The walking was all easy, the landscapes very diverse, the plants interesting, and the views as good as they get. It was also quite rewarding to get to visit a place I have passed by for so many years.

The San Francisco Public Utilities is one of the largest landowners on the San Francisco peninsula. Its watershed lands include over 23,000 acres along the main north-south ridgeline in the Santa Cruz Mountains in San Mateo County. It has owned most of this land since the 1860’s and has constructed several dams and their associated reservoirs to provide and store water for the city and some of the surrounding communities. It also owns another 30,000 acres of property in the southeast Bay Area in Alameda and Santa Clara Counties.

Unlike the watershed properties owned by the East Bay Municipal and Marin Water District properties, the public has been rigorously excluded from San Francisco’s lands until recently. The public applied enough pressure that eventually the utility was forced to grudgingly provide a bit of public access to at least some of their holdings. This access is limited and controlled, but at least it is a start.

Visitors may only visit when accompanied by a docent, but it is not too difficult to arrange such a visit via their website. In our case, we have a friend who is a registered docent, so were able to arrange with him to do the full Fifield-Cahill Ridge Trail. This is a roughly 11-mile through-hike of the entire watershed between Highway 92 in the south and the Golden Gate National Recreation lands to the north.

There is free public parking at the south end in a small lot at the corner of Highway 92 and Skyline Boulevard. It is 0.8 miles from there to the Skyline Quarry entrance gate. Logistics for parking and shuttling vehicles will depend on which of the docent-led walks one takes. In our case, we all met at the Quarry Gate with one hiker’s wife doing the final shuttle between the parking area and the Quarry Gate.

It can be arranged to do the hike in either direction, but walking north has the advantage of having the sun at your back. It also means that the intimate forested areas are at the start and the spectacular sweeping vistas conclude the day’s outing.

After leaving the watershed lands at Portola Gate at the north end of the walk, there are several options for completing the walk. Four of these are included in the CalTopo map. There is free parking at all of these trailheads except at Skyline College. Again, shuttles or Uber/Lyft will be necessary to retrieve any vehicles parked at the start of the walk. We ended our walk at the Mori Ridge trailhead where there is plenty of parking. From there, for those who want to walk a bit more, it is less than a mile of trail walking to a fine Pacific overlook at Mori Point.

Most of the land in the watershed was acquired in the mid 1800’s. Since it was closed off, there has been no cattle grazing or agriculture activities other than some tree planting. As a result, the area is unlike the surrounding public lands, most of which had been grazed extensively prior to being acquired as public parklands. There are some old, strangely shaped Doug Fir trees. They are not the tall straight Doug Firs commonly seen in northern California, but bulky, with massive twisted branches protruding in all directions and are quite beautiful. Our docent told us that the wildflowers along this route can be spectacular from mid-March through May. We saw numerous plants starting to bloom, mostly in the more wooded areas, but it was bit early for vast displays.

Further north along the trail, there is extensive coastal chaparral which has not been grazed or otherwise disturbed for over 150 years. We know of no other nearby area where you can see such undisturbed old growth chaparral.

The northern sections of the walk have great views out over San Francisco Bay and the Pacific Ocean. If it is clear, the Farallon Islands are easily visible and you can see all of the Drake’s Bay and the surrounding Point Reyes National Seashore.

After leaving the watershed, you will pass by the Portolá Discovery Site, the place Europeans in 1769 first saw San Francisco Bay. Since the Bay Area had been inhabited for at least 10,000 years prior to this date, calling it a Discovery Site is a bit disingenuous. The views are fabulous nonetheless.