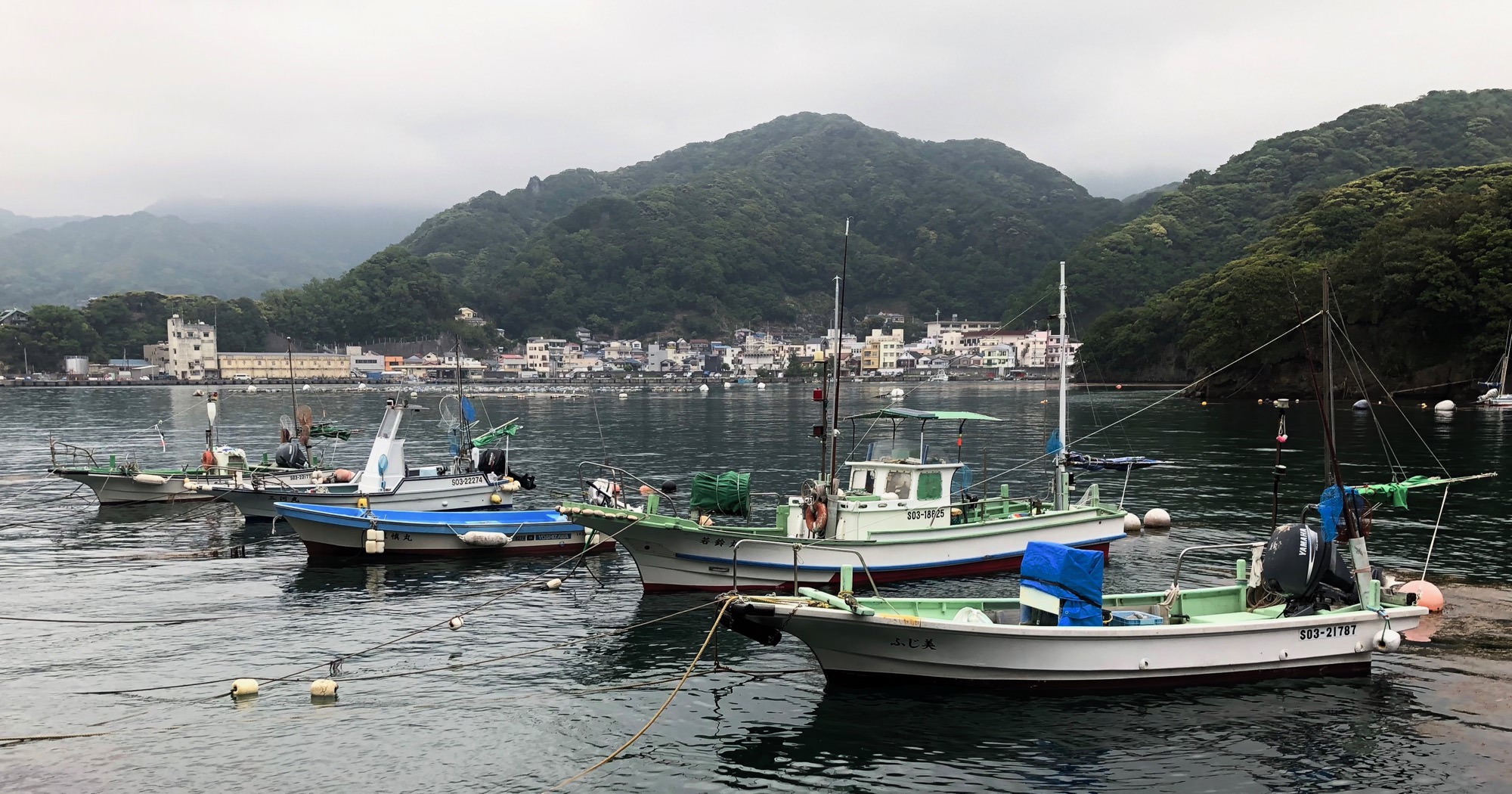 What: easy coastal hiking on a mix of paths and roads.
Where: from Shimoda to Heda Port, Japan.
When: May 14-18, 2018 (5 days).
Distance: about 77 miles miles.
Highlights: rocky cliffs, small fishing ports, interesting geology, many nice pieces of coastal trail.

The route line shown in our CalTopo map is reasonably accurate, but we did not record our track while walking and it may differ in minor ways from the actual trail routing. The track should be good enough for others to use, especially with the help of of the sign posts found along the route.

We used a combination of OpenStreetMap and the Japan Alps Hiking Map app to locate the trails during our planning activities.

At the Tourist Information Center in Dogashima we acquired a very useful free printed map in English called the Nishiizu Walking Trail Map.

We traveled to Japan to hike the Tōkai Shizen Hodō (TSH). We completed that trail with a week to spare before our flight home. While spending the night in a Tokyo B&B, we researched options for another walk not too far away. We always enjoy coastal walking and OpenStreetMap showed were trails along much of the west coast of the Izu peninsula. We posted a query to the Hiking in Japan Facebook group and somebody quickly confirmed that there were viable walking opportunities on Izu, so off we went. 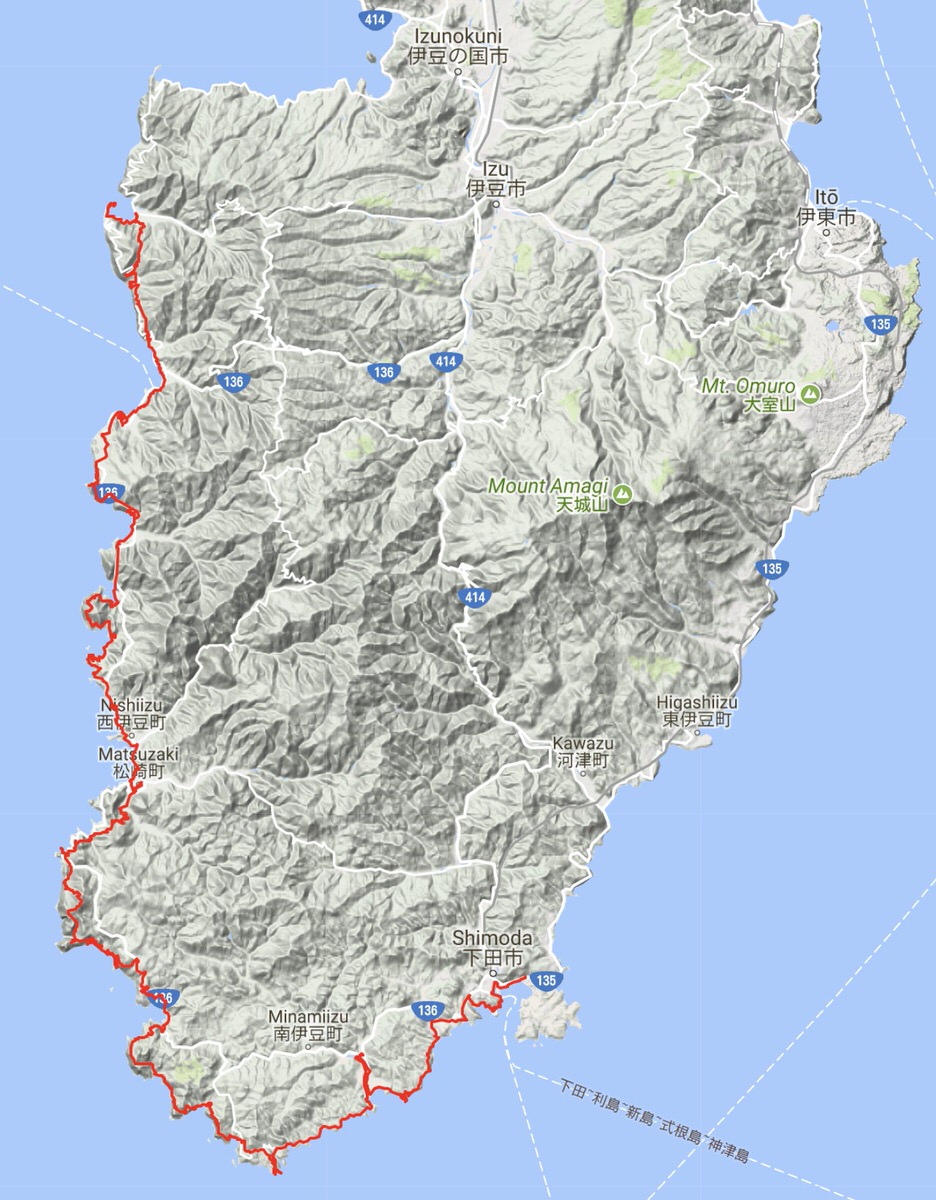 I love coastal walking in general and thoroughly enjoyed this particular stretch of coast. The logistics were easy, the weather was great, the small fishing ports were aesthetically pleasing and interesting to watch, the forests were lush, and the geological features were dramatic and clearly explained. The trail was well maintained, and the excellent signage included explanations of the geological features. There are tourist facilities and holiday rental houses in most of the villages, but the coast did not feel overrun by tourist clutter.

The sections on footpath were terrific. Most of the road walking was on quiet roads but unfortunately some was on primary roads. This is world-class coastal scenery, and when the rest of the planned coastal trail is complete it will make for a very fine multi-day hike.

This walk was a very satisfying way to complete our visit to Japan. There is no coastal hiking on the Tōkai, so this short trip offered a nicely different type of walk. The vegetation was a subtle variation from the forests on the earlier trip. The little fishing towns were a interesting change from the agricultural towns on the Tōkai. It was relaxing to not have a specific place we needed to reach in order to “finish” the walk.

Coastal walking is always a bit special and this route did not disappoint. The vast blue sea, crashing waves on big offshore rocks, the smell of salt air and seabirds all make a coastal hike different from other kinds of walks. The route sometimes went a bit further inland than a textbook coast walk like the Southwest Coast Path in England, but our trip was quite satisfying none the less. Services along the way were frequent enough that we had no worries about finding food and thus our packs were lighter.

I quite enjoyed this walk. The Izu coast is very attractive. There is a nice diversity in the landscape, from sweeping vistas to intimate little pocket beaches. All the human activity in the little fishing towns was fun to watch. While this walk is not long enough or of such high quality that it is worth traveling a long distance to hike it, if you find yourself in Japan with a bit of free time, by all means considering going to Izu for a fine short trip.

Please see our trip report on the TSH for general information about hiking in Japan. Comments in that report are generally applicable to this walk as well.

We took a train from Tokyo Station to Shimoda, a large town on the southeast coast of the Izu peninsula. There are frequent trains, and with favorable connections, it takes roughly three hours to make the journey.

From Shimoda we walked west and north along the coast.

The Tōkai bus line runs several daily buses up and down the main road on the peninsula’s west coast. There are bus links between many of the west coast towns and the Shuzenji railway station. From Shuzenji there are frequent trains back to Tokyo. Thus no matter how far we were able to get up the coast, we would be able to easily get back to Tokyo in time for our flight home.

The Izu Peninsula Geopark includes many unique geological and other natural features and was named a UNESCO site in 2018. One of the Geopark’s goals is to build a continuous footpath on the west coast of the peninsula, and this project is partially complete. The trail segments that have already been finished are connected by walkable roads, thus allowing a nice multi-day hike. We walked all of the trail segments we could find between Shimoda and Heda Port. Once we were on a segment of trail, it was generally well waymarked and easy to follow

We ran out of time and did not walk the final ~10 km between Heda Port and Cape Ose, the northernmost point on the west coast. We assume that those trail segments are as well documented as the rest of the route. We believe that a regularly scheduled bus serves Cape Ose and it would be a logical termination for this coastal hike. It would be easy to do shorter versions of our walk and still have a satisfying experience.

The attractive coast is dotted with small villages and modest-sized towns, each of which supports an active small-scale fishing fleet, some agriculture, and provides some level of tourist infrastructure. A few of the towns have large hotels that were nearly empty when we were there. The Geopark is interspersed between these communities.

Overall, conditions were similar to, but a bit easier than the TSH. The peaks are lower and usually not quite as steep. Many of the trails were recently constructed or recently maintained and were in very good condition. The vegetation was lush and thick. In a few places, plants had overgrown small areas of the trail, but we believe they are regularly trimmed back. High quality trail signs included English text.

The road walking generally had very little traffic when we were there, but during the high tourist season, that situation may be different.

There are many road tunnels on this route, including one that is about 1 kilometer in length. All but one very short tunnel had a pedestrian pathway elevated above the road. Walking through the tunnels can be a bit unnerving, but we never had anything happen that seemed particular worrisome. Vehicle noise is quite loud inside the tunnels and we wore earplugs while walking through the longer ones.

Our CalTopo map shows the locations of many convenience and grocery stores. This coastal area is popular with tourists, so there are many restaurants and cafes, some with signs and menus in English. Not surprisingly, fresh seafood is commonly available.

We wild camped every night and sites were never difficult to find. There are also many accommodation options of all sizes. It is likely that with a bit of planning the walk could be done carrying only a daypack.