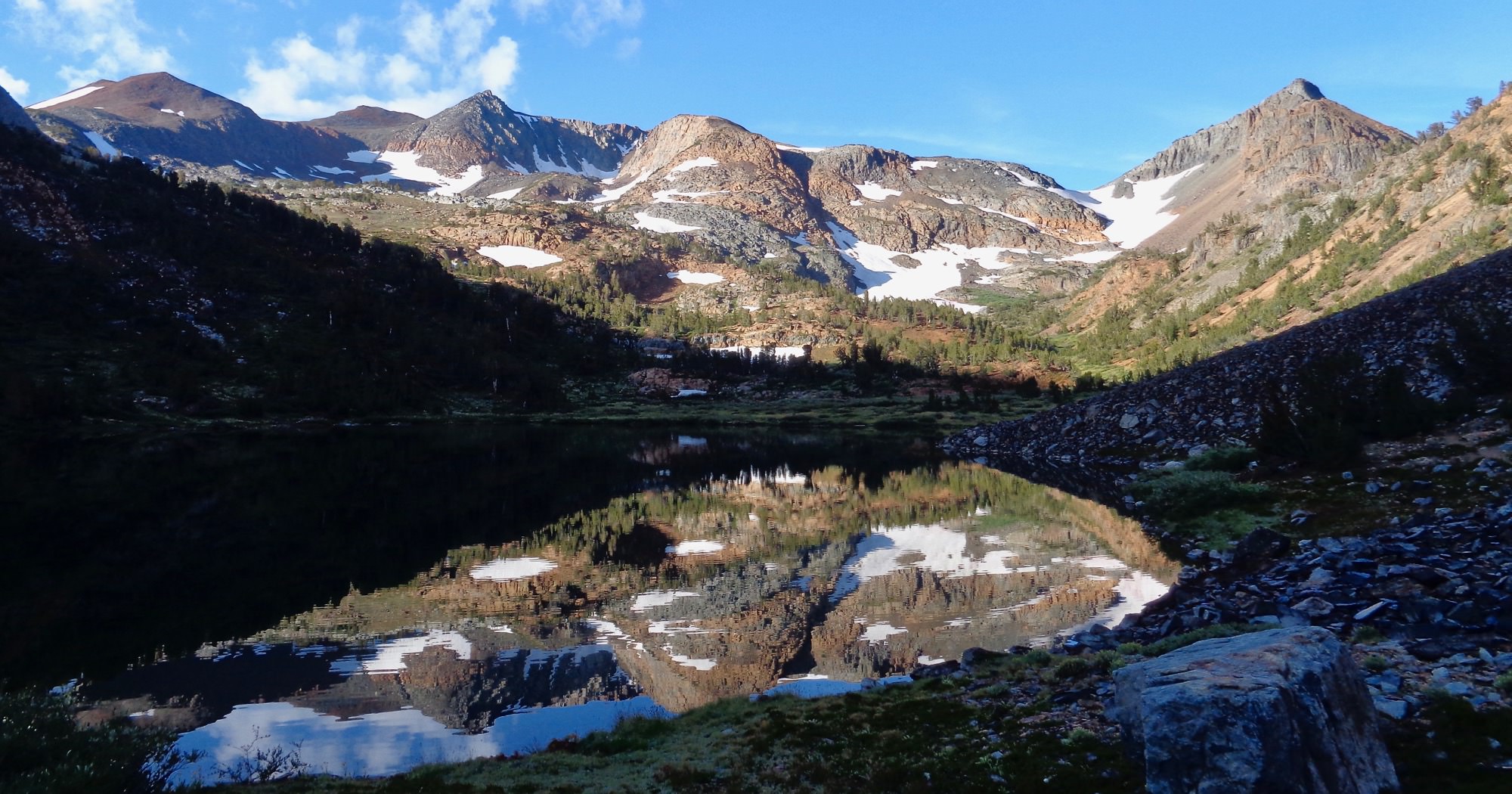 A permit is needed and easily available from the Forest Service.

Parking is free at the Saddlebag Lake trailhead.

As for all our trips, I used our two favorite mapping tools: CalTopo.com to prepare gpx data and printed maps, and Gaia GPS while hiking.

We had taken two long trips in 2017: one in Utah and the other in Europe. We both had a hankering to get back into the Sierra before winter set in. Amy would be backpacking with her siblings for a week in the Ansel Adams Wilderness. In light of her absence, I (James) decided to take my own short trip and explore a bit of the Sierra I had not been to before and bag a couple of SPS peaks along the way. 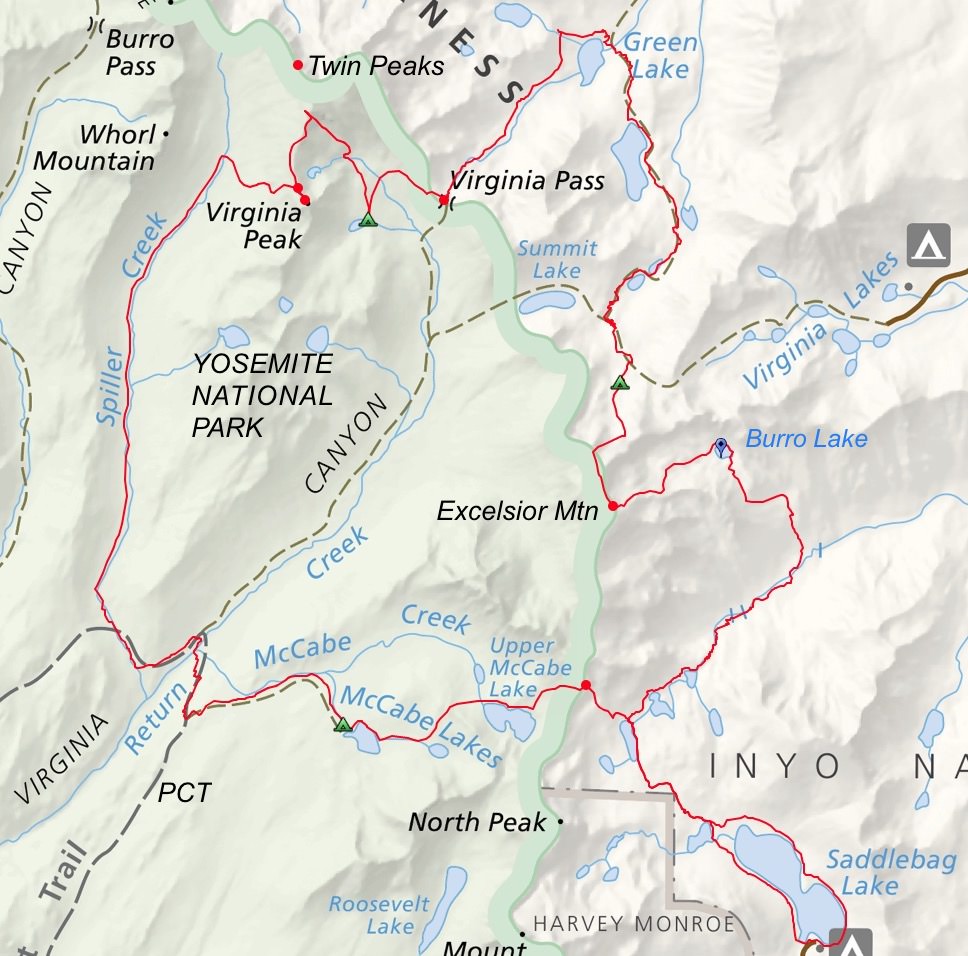 This trip was easy and fun, although the usually perfect Sierra autumn weather was not to be had. It rained, hailed, and/or snowed late in the afternoon on three days. Fortunately I also experienced some contrastingly beautiful clear morning skies.

Burro Lake was a fine surprise and its intense turquoise blue color was something I had never previously seen in the Sierra. Virginia Peak was an easy ascent and the views and weather on top were good. As a reminder that autumn weather in the Sierras is not always stable, a thunderstorm hit just as I summited Excelsior Mountain so I got off as fast as I could.

The descent of Spiller Creek Canyon was an absolutely fabulous cross-country walk. The canyon is isolated, beautiful and remarkably easy to walk down. Big open meadows, a fine creek and lovely stands of trees made this place a pleasure to visit.

What was most surprising to me on this trip was just how much snow remained from the exceptionally heavy snowpack from the prior winter. There was more snow and it was at lower altitude than I can remember for many years past and it felt a lot more like late June or early July than mid-September. Many snowfields were covered with a layer of slippery rock-hard ice, and even at extremely low angles were not walkable without the crampons I did not have. This prevented me from going to a couple places I had planned to visit. The mountains always bring surprises and judgement and flexibility are necessary.

I can heartily recommend this walk to anyone with the requisite off-trail skills who wants a short, fun, Sierra hike with simple logistics.

The route is quite straightforward and the on-trail portions are clearly marked and easy walking. I walked counter-clockwise. There are several longish cross-country segments: the first starts at Lundy Creek, climbs up to Burro Lake and up and over Excelsior Mountain via its east ridge, and then descends to pick up the Green Creek Trail connecting Summit Lake with the Virginia Lakes. The climb to Burro Lake was easier than it looked. Most of the brush can be avoided by weaving steeply back and forth on the west side of the outlet creek until roughly the 9160-foot level. Cross the creek and continue climbing up its east side.

At Virginia Pass, the route leaves the trail to descend into Virginia Canyon, climb Virginia Peak and then drop down Twin Peaks Pass into Spiller Creek Canyon. Be careful on the descent into Spiller so that you do not get cliffed out. Easy cross-country travel continues down Spiller Creek for about five miles until it meets the PCT.

There is bit of pseudo cross-country climbing from McCabe Lake to cross the ridge back into the Saddlebag Lake basin, but there are use trails in the area that are easily followed.

There were a myriad of good places to camp along the route. Water was plentiful. Total gain was a bit over 13,000 feet. I met a number of day-hikers and some other backpackers on the trails, but did not see other people on the cross-country segments.

Disclaimer: Do not rely on our exact tracks for your route; use skill and common sense.  We strongly recommend that anybody engaged in cross-country travel in the Sierra use RJ Secor’s book for more detailed route descriptions and difficulty levels.