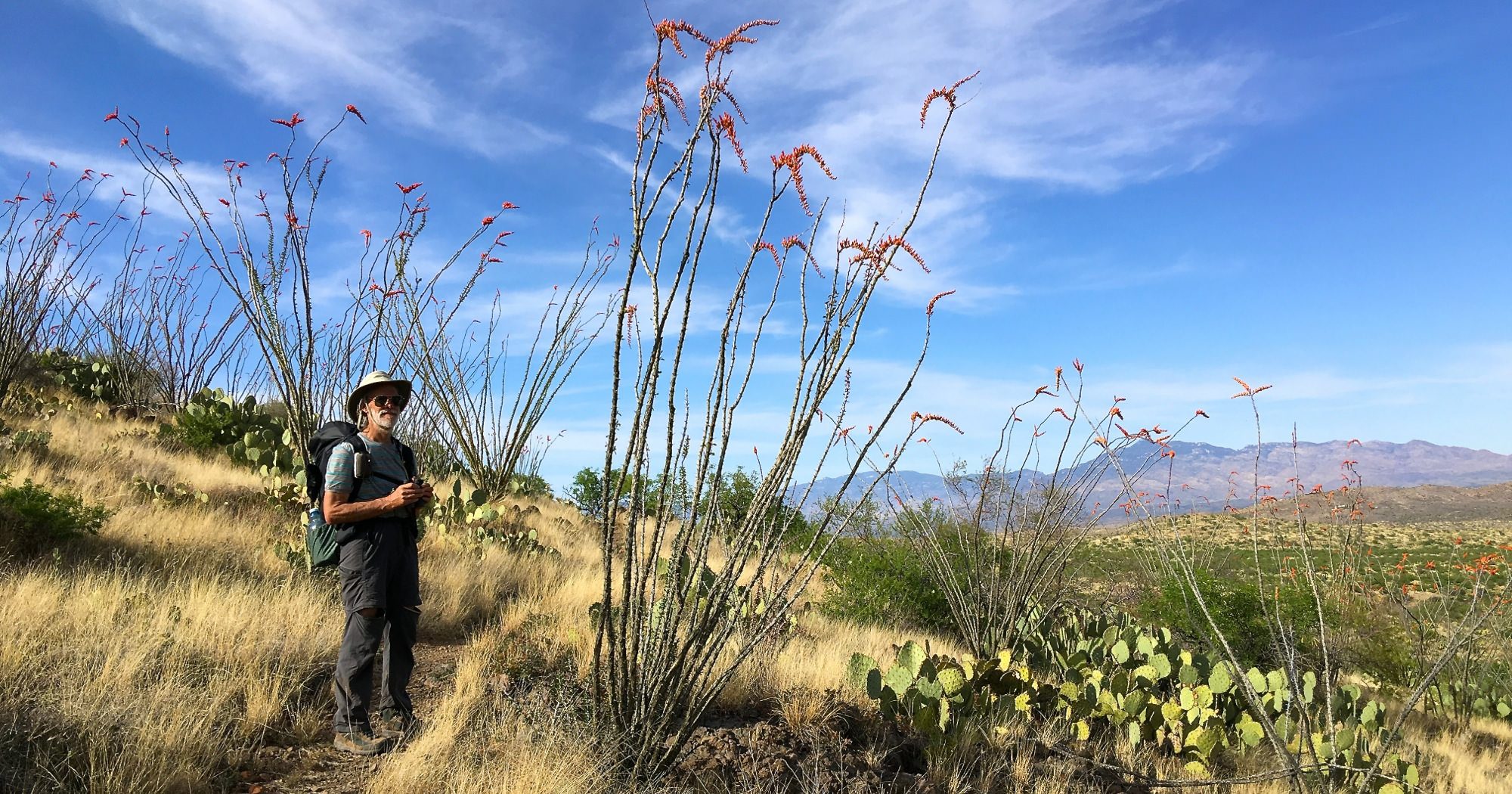 The Arizona Trail Association website is an essential resource.

Your Complete Guide to the Arizona National Scenic Trail by Matthew Nelson.  The book has extensive on-trail navigational information, but at 25 ounces it is too heavy to carry and it is not necessary if you have reasonable navigational skills.  It is particularly useful for section hikers because it includes information about the road access points.  The chapters on botany and geology are excellent primers.

The Arizona Trail App, by Guthook, for iPhone and Android phones.

We are serious birders, and Arizona, particularly the southern half of the state, is a birding hotspot.

The vast majority of our North American backpacking trips have been in our three favorite regions: the San Francisco Bay Area, Sierra Nevada, and Southern Utah. In the past several years we have been making an effort to take trips in other regions in the country.

While we are willing to spend inordinate amounts of time planning novel and creative routes in our three favorite regions, when we travel to unfamiliar destinations we usually prefer plug and play trips on defined routes with high quality route information. The Arizona Trail is such a route.

I enjoyed this trail very much, although it was not so magical that I will put it on my top-10 list. I especially enjoyed the extreme diversity of habitats and scenery encountered due to the dramatic change in altitude. Saguaro Cactus desert to Spruce forests, then back down to cactus, then back up, repeated over several weeks. The plant and animal life were more varied than any other North American trip we have previously taken.

The Colorado Plateau landscape of southern Utah and northeast Arizona knocks my socks off. With the exception of the day we crossed the Grand Canyon, none of the scenery on this hike was as stunning as any day we’ve spent in the canyons of southern Utah.

This trip had just the right amount of hiker traffic for me. We met about a dozen other thru-hikers and several dozen section hikers, enough people to be interesting and fun, but few enough that it didn’t become an intrusive social scene.

Crossing the Grand Canyon is beautiful and a crucial part of the scenic diversity, but it is a logistical hassle. I recommend planning to cross in one day and avoid the whole process of getting a permit. Or, for people who are not strong enough to cross in a day, I’d consider walking southbound, since you would then be able to predict the date of the crossing and secure a below-the-rim camping permit for that date.

The walking was straight-forward and the trail is well documented and well maintained so the walking was easy. Note, however, that long stretches of this trail are not high in creature comforts. The low altitude desert sections offer very little shade and simply finding a place to sit comfortably can take some time due to the abundance of cactus. There were times I craved a nice place to sprawl for a relaxing lunch.

The timely information about water sources made possible by the Guthook Smartphone app is critical to the success of the hike.

It is remarkable that we have so much public land that it is possible to cross an entire state on a trail where, outside of the GCNP, one is permitted to walk and camp at will. I think American hikers sometimes take this for granted; we are very fortunate.

I truly enjoyed this walk. The trail was generally well marked and easy to follow. The hiking itself ranged from simple to rough, but never just silly difficult. The terrain and habitats had a lot of variety, so the walk was rarely boring. The birds were terrific and many are not found in other parts of the US.

The trail is well routed to avoid roads and there were very few places on the trail that allowed motorized use. Trail maintenance was generally good, especially considering that most of the work is done by volunteers. Overall, trail conditions were quite decent and old trip reports commenting on the difficulties of this walk are now way out of date. The only area that needed any significant trail work was in the Mazatzal Mountains where a huge fire in 2012 stimulated explosive brush growth. Even there, the overgrown areas were short and not difficult to deal with. There is a marked re-route around the worst section; take it. The tread in the Mazatzals is worn out and in places covered with lots of loose rocks, but was not horrible.

The Sonoran Desert sections were particularly interesting and unlike any other desert we have walked in. The plants were diverse and mostly heavily protected by various types of thorns, spines, and spikes, making finding campsite sometimes challenging. Walking through the Saguaro forests where each cactus is unique is an endlessly fascinating experience.

We were generally fortunate with the weather. We had very few really hot days and almost no rain. We did have a daylong snowstorm in the mountains north of Flagstaff that eventually dropped over ten inches of fresh powder on both the trail and us, leading to one very cold night and frozen boots in the morning. Since it had rained a bit prior up to our hike, we had some decent, although not spectacular, flower displays.

One thing that struck us both was how empty Arizona is. We hiked long stretches where we saw almost no signs of human occupation or use. We crossed very few fences and saw a surprisingly small number of cows. We crossed paths with other hikers and trail users, but often only one or two people a day. Almost everyone we met was friendly and local residents were usually welcoming and helpful.

I highly recommend this walk to other long-distance bzckpackers, particularly those who want to try something different than a typical trip into the high mountains. If you prepare properly and pay attention to water resupply, you shouldn’t have any significant problems completing the AZT.

There is a significant amount of available data about this trail in print and on-line, and our comments below are limited to topics that are most pertinent to this particular trail.

Finding sufficient water is the most critical problem an AZT hiker must contend with. Water sources are often far apart and may or may not have useable water depending on the season, rainfall, and other factors. There are two data sources that were extremely helpful.  The first is found in the AZT website and is updated intermittently.

The second is the Arizona Trail App. The app provides detailed maps of the trail, with distances and hundreds of points of interest (the detailed maps are a worthwhile $10 upgrade). Using the app, hikers can report on the current status of water sources and those comments are updated real-time whenever their phone has an internet connection. For most water sources during our hike we had status reports that were less than a week old. We strongly recommend using this app and doing your part by updating the water info at each source you encounter.

We mailed food boxes to seven locations prior to starting our walk. This worked well for us as each box contained the basic supplies we needed for the next trail leg; we supplemented the contents of the boxes with whatever was available locally. Sometimes shopping opportunities were good, but in some places very little food useful to a long-distance backpacker was for sale. Our resupply points were:

Crossing the Grand Canyon is the one place on the AZT where permit issues can be a hassle. The National Park is extremely popular and the Park Service has the impossible job of finding a balance between user access and quality experience. The AZT crosses the canyon on the two most heavily used trails in the park and there are very limited on-trail camping opportunities available along the route. The opportunities for stealth camping are not good and rangers who know the territory well patrol the trail. Since an AZT hiker, especially one going northbound, will not know when they will reach the canyon, obtaining an in-canyon camping permit in advance is not realistic. The chances of obtaining a same-day walk-up permit during the normal AZT hiking season is also highly unlikely. An AZT thru-hiker has two choices: prepare to spend a day or two or three on the rim waiting in the queue for a permit or hiking the canyon rim-to-rim in a day. If you walk rim-to-rim, camping on the north rim will not be a problem. We elected to do a rim-to-rim walk, and while it was a long day, we also finished well before dark and were able to find a decent campsite not too far from the north rim trailhead. 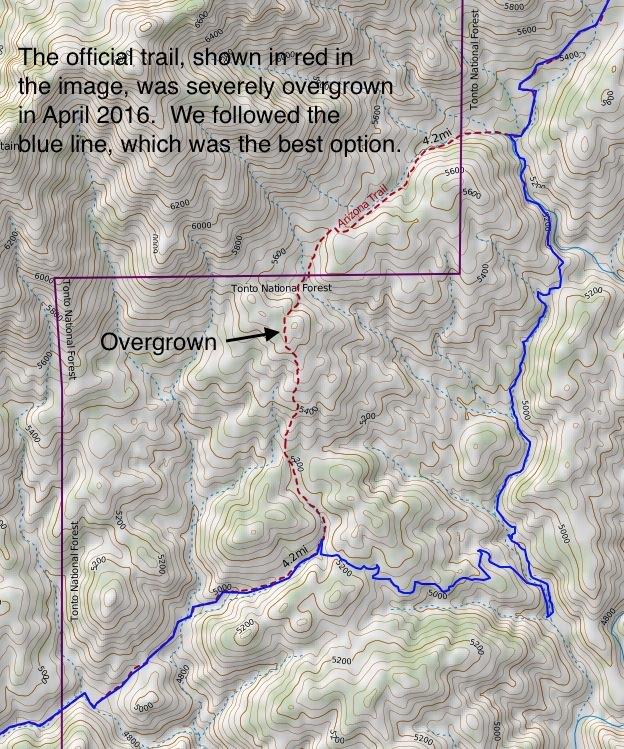 The least maintained section in April 2016 was through the Mazatzal Mountains. There were areas of overgrown trail, downed trees, and rough tread. The cause of this was a massive fire that burned through the area in 2012. It destroyed many of trees and stimulated the rapid growth of underbrush. Storm run-off erosion has damaged the trails themselves. Volunteers are working diligently to rehabilitate the area, but there are many miles of trail to tend and not that many people working on those miles.

There was one reroute that was bit confusing. Open our CalTopo map of the route, switch to the MapBuilder Topo layer, and zoom in on AZT22: Saddle Mountain. You can see the old routing marked as a dashed red line. The Guthook Arizona Trail app shows the trail using this original routing over the east slope of Sheep Mountain. Per the recommendation of a trail maintenance volunteer, we followed the trail indicated by the blue line which dropped into a canyon to the east and then turned north to regain the main route. The option we followed was signed on the ground and was a well-maintained piece of trail. We spoke to people who stayed on the original western routing and they reported it to be a horrible thrash. We don’t know if the original route will be cleaned up and made passable again or if the AZT will be permanently rerouted.

If you are northbound, the fork is shortly after you climb out of McFarland Canyon, marked by a red arrow in the CalTopo map.