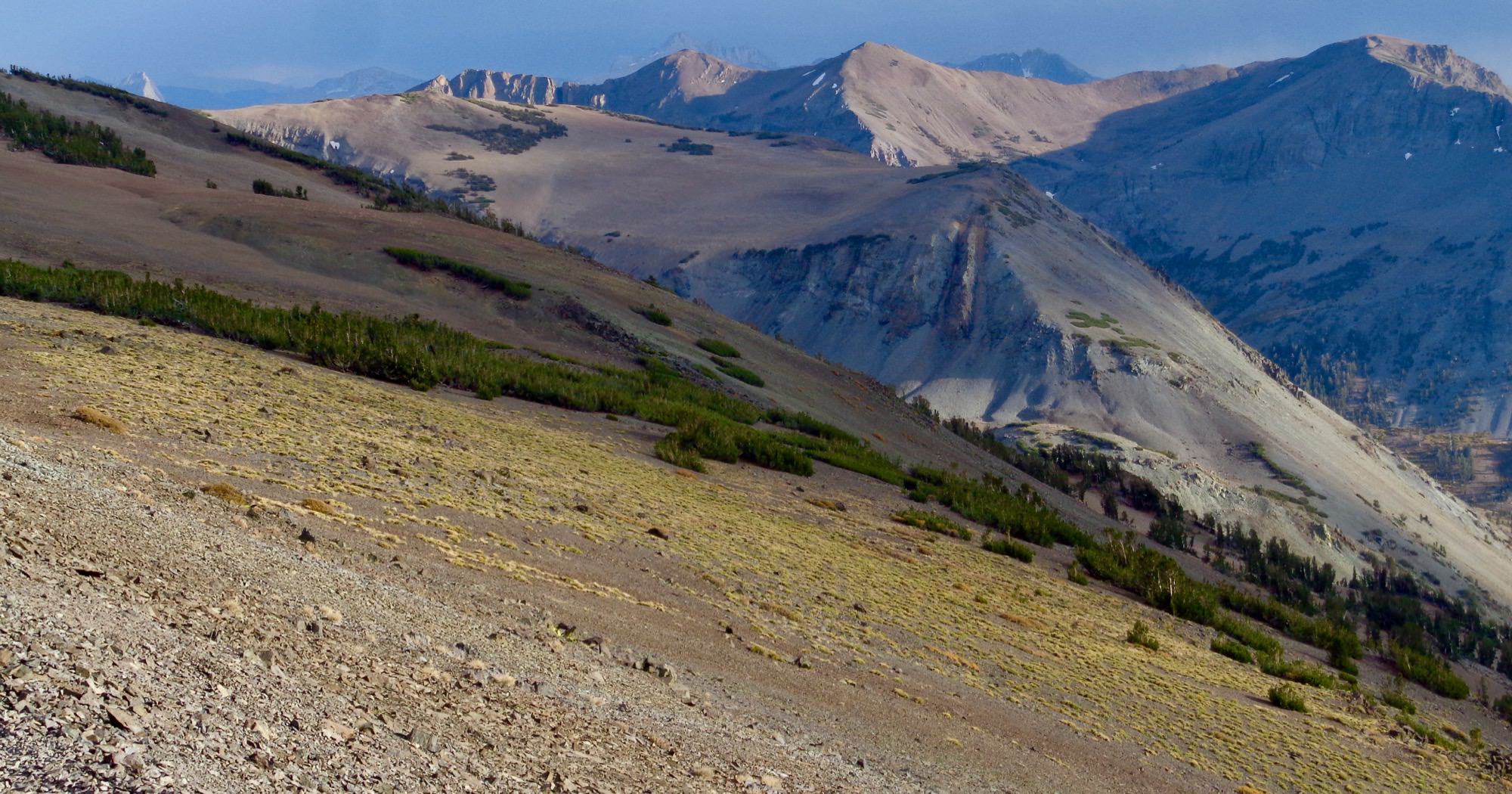 In August 2013 we hiked northbound on the Pacific Crest Trail (PCT) from Ebbetts Pass to just north of its crossing of Interstate 80 and we enjoyed that trip very much. Although we had previously walked most of the PCT within Yosemite National Park, the bulk of the section between Ebbetts Pass to the Yosemite boundary would be new for us.

September is the best month for backpacking in the Sierra Nevada and late in that month in 2016 we had an unexpected opportunity to catch a ride to the Ebbetts trailhead from a friend. The long term weather forecast was good, so we took advantage of the circumstances and quickly organized the hike. Since this would be a short duration trip, it was easy to put together with minimal planning. 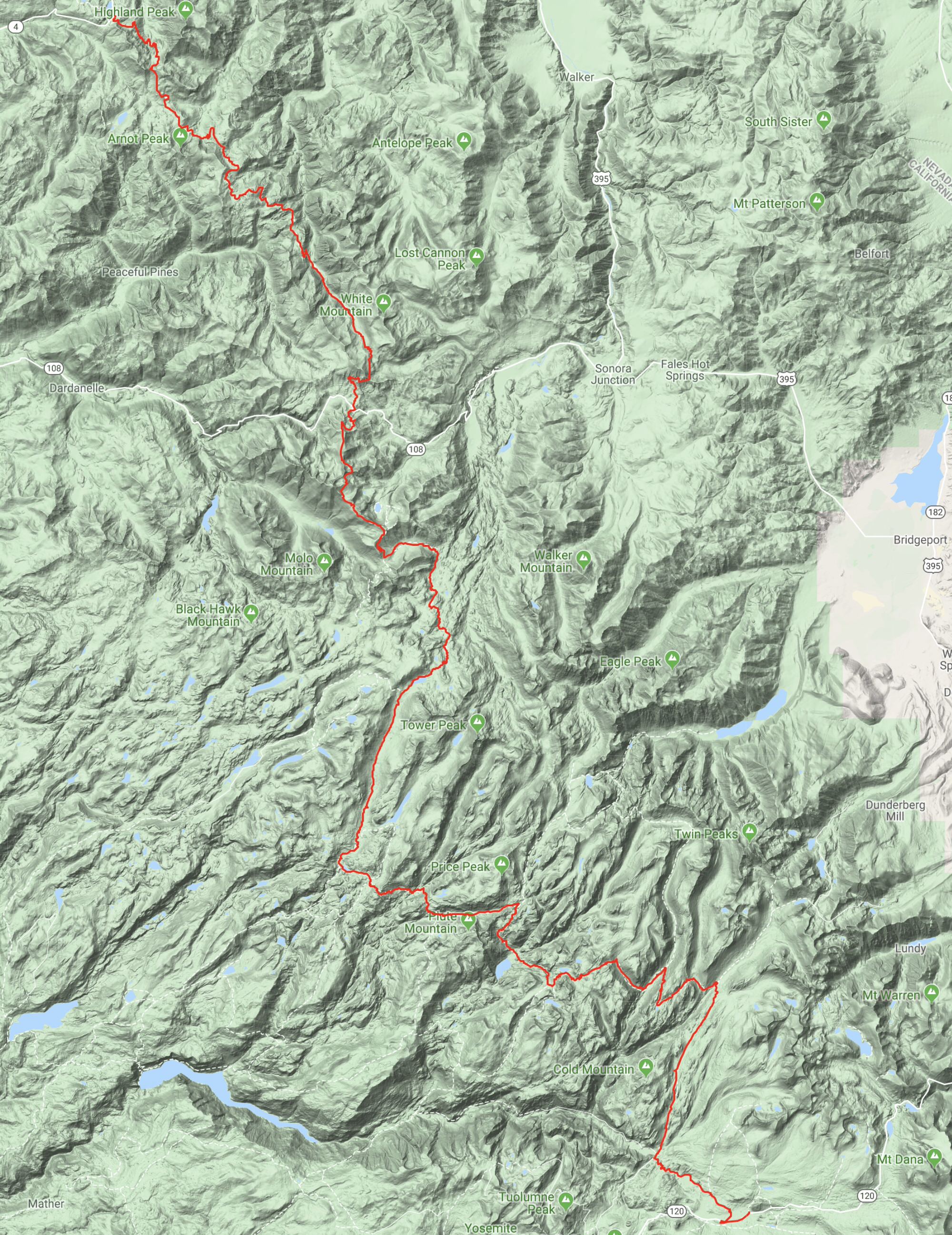 This was a fun, easy, low-stress hike through diverse and beautiful scenery. This section of the PCT was more interesting to me than the 2013 hike from Ebbetts Pass north to Interstate 80. The portion within Yosemite National Park has some of the white granite grandeur of the southern Sierra.

I highly recommend this hike to anybody who can somehow arrange a ride to Ebbetts Pass; without that ride the logistics of this route are not straight-forward.

This was an extremely satisfying walk. Easy to plan and execute, with much better than expected scenery, good weather, no bugs and a lot of solitude. Finding fine campsites was easy. The route was diverse, the trail well maintained and the hiking pleasant.

This route a great short trip that provides a nice taste of all that the Sierra has to offer; I recommend it to any backpacker who can carry a week’s worth of food.

The roads crossing Ebbetts Pass, Sonora Pass, and Tioga Pass close with the first significant snowfall, usually in November, but potentially as early as late October. They reopen in the early summer, with exact timing dependent on the depth of the winter snowpack.

The route follows the well-marked and well-maintained Pacific Crest Trail (PCT). There are no on-trail resupply options with the exception of Sonora Pass, where it may be possible to have a package delivered by Sonora Pass Resupply. Their van was there when we walked through, but they had no supplies for sale, only a pre-arranged package delivery service that we did not make use of.

The route passes by Glen Aulin High Sierra Camp, which is open June thru September. They provide meals to overnight guests; a lottery is held each October to determine who can get a reservation for the following year. For those who can score a reservation, this would be an interesting place to spend the night.

Finding water was never a problem, even in a dry year like 2016. Insect problems were non-existent.

Yosemite National Park requires overnight backpackers to carry bear cans. If you walk northbound from Yosemite an NPS backcountry permit is required and those permits are on a quota system. If you walk southbound from Ebbetts, you can easily obtain a permit from the USFS.

The hike is high quality, with much geologic and habitat diversity, grand vistas, and beautiful forests, meadows, and streams. Think of it as a shorter, lower altitude, and less crowded version of the JMT. Between Ebbetts Pass and Glen Aulin, we saw fewer than six other backpackers. Glen Aulin is a popular destination for day hikers, so trail between Glen Aulin and Highway 120 at Tuolumne Meadows can get a lot of use.

We completed the hike at Tuolumne Meadows. As it was late September, all of the facilities, both public and private were closed.

We continued eastbound from the end of our hike down to Lee Vining via a combination of hitchhiking and about four miles of scenic trail and cross-country walking below and on the east side of Tioga Pass. We stopped for a fantastic early dinner at the Whoa Nellie Deli near Lee Vining, camped near Mono Lake, and caught the first ESTA bus to Reno the following morning. From Reno we took a bus back to the Bay Area.