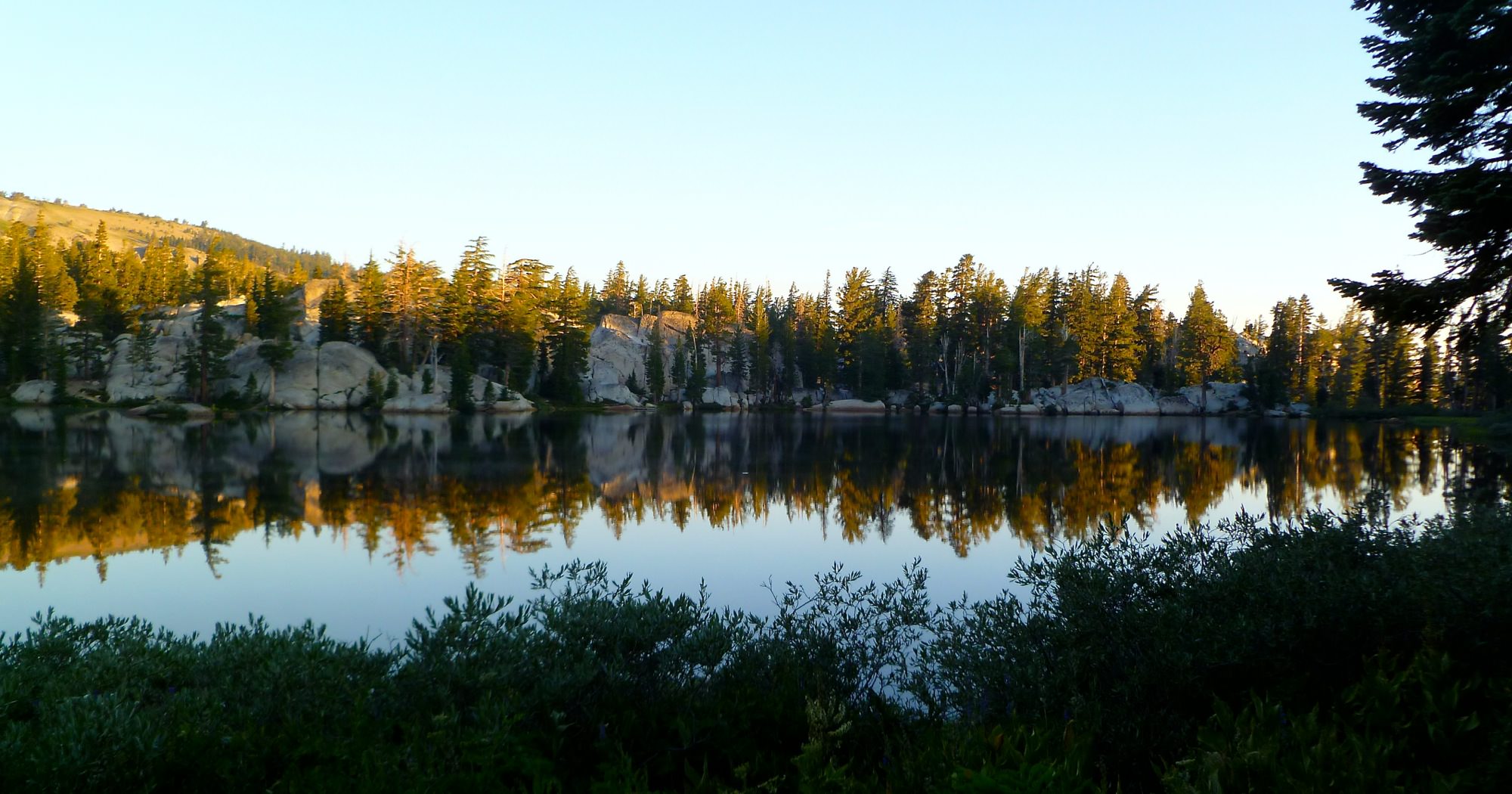 What: a section of the Pacific Crest Trail and 4 summits
Where: Ebbetts Pass to Castle Pass just north of I-80
When: August 1-7, 2013 (7 days)
Distance: about 120 miles
Highlights: Simple logistics, pleasant walking, new places to visit

This was an opportunistic hike. A friend generously offered us a ride from home to Ebbetts Pass. Another friend who lives in Reno generously offered to pick us up at the I-80 rest area near the PCT crossing and drop us at Reno’s Megabus stop, where we could catch a bus back to San Francisco. Halfmile’s printable map set and trail notes simplified planning so that we could organize quickly. The weather report was extremely favorable. Although we did not expect this to be as striking as the Sierra’s south of Mammoth, we looked forward to exploring a mostly new region. 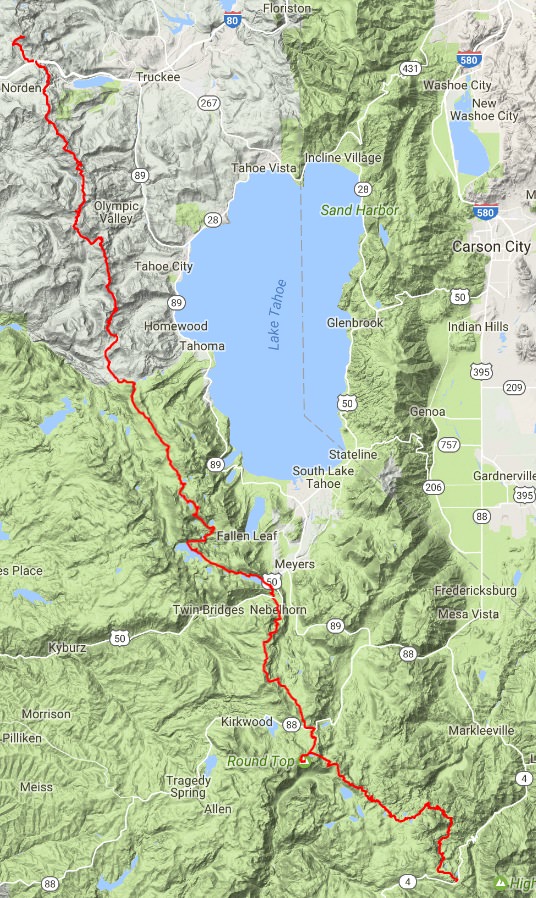 The early portions of this walk were through much more desert like habitat than we have experienced in previous Sierra trips.

The high point on the center left skyline is Round Top, a peak we planned to climb on this trip.

Alpenglow on Jeff Davis Peak in the Moklumne Wilderness.

While the area in the the Sierra rain shadow, a strong late summer rainstorm had greened the plants up a few days before we arrived.

The moist meadows near Round Top were full of blooming flowers.

Round Top and Winnemucca Lake. The route to the top goes around to the right.

The first view of Lake Tahoe in the upper right. Caples Lake, a popular resort area, is on the left.

The Echo Lake Chalet is just north of Highway 50. There is a water taxi across the Echo Lakes for people who want to avoid the walk along the lake to get into Desolation Wilderness.

We got fresh food for lunch at the Chalet store.

A fine view of the Crystal Range from above Susie Lake.

Dick’s Lake north of the pass. Fontanillis Lake just beyond it.

The tent site was in a small draw, so there was no noticeable highway noise.

We found a fine place to camp on the ridge between Donner Pass Road and Interstate 80. James is trying to get a photo he likes of the glacial erratics scattered in the area.

The next morning, we dropped down the ridge to the Interstate 80 under crossing.

Interstate 80 and Donner Pass to the south.

This section of the Sierra is attractive, but it does not have the knocks-my-socks-off grandeur of the Sierra Nevada between Mammoth and Whitney. This was a pleasant and easy hike and I’m glad we did went. I really enjoy the process: up at dawn; walk all day with many stops for birds, flowers, lunch, photos; find a niche and set up camp; sleep; repeat. I like it enough that it’s very satisfying even when the scenery is good but not great, as was the case in this trip.

We are lucky that we can hike in our favorite destinations and also explore new trails. It’s not likely that I will return to this region again, as it is not nearly as scenic as the mountains south of Mammoth, but I’m very glad that I explored a new part of California.

Although this walk in the Sierra Nevada is not as scenically grand as those in the Sequoia/Kings Canyon National Park area, these mountains north of Ebbetts Pass provided an interesting and rewarding hike. This was an easy and very low stress trip, both from a planning and hiking perspective. Sometimes it is nice to do a drama-free walk in the mountains with only simple off-trail complexities to contend with. It was also fun to re-visit the Desolation Wilderness, a place I had not been to for many years. Walking this route raised my interest in hiking the Tahoe Rim Trail, a trip we completed five years later.

This is an easy low-stress walk on well-marked and maintained trail, without massive gains and losses, and at a lower altitude than some of the areas further south. This would be a good trip for less-experienced backpackers, people who would like to backpack with children, or those susceptible to altitude sickness.

Truckee is only a few miles east of the PCT just off of I-80, and Greyhound runs a bus from Truckee to San Francisco. Anybody in the Bay Area who can find a ride to Sonora Pass, Ebbetts Pass, or Carson Pass could consider walking the PCT from any of those passes north to Truckee.

We took a couple short side trips off the PCT to climb four SPS Peaks: Round Top, Granite Chief, Tinker Knob, and Castle Peak.

We were quite surprised by the number of people we encountered along the trail. There were plenty of day hikers, a number of backpackers walking the Tahoe Rim Trail, which is concurrent with the PCT for about forty miles, and a couple of people doing long segments of the PCT. In particular, there were many people in the area around Lake Winnemucca enjoying the easy day hike in from Carson Pass. There were many weekend backpackers in the Desolation Wilderness. Although the PCT was busy in places, we never had any difficulty finding private campsites. Wildflowers were still quite vibrant and colorful, even though it was already August. We had very few mosquitoes and never needed repellent.

During the summer there is friendly staff at an information building at Carson Pass. As PCT hikers, we were offered water and cookies. You can’t buy food there, but you could purchase guidebooks, historical accounts, and stuffed animals.

There is a deli and store open during the summer on the trail at Echo Lake a couple of miles north of Echo Summit. They sell freshly made sandwiches, beer and ice cream as well as a variety of groceries including a small selection of fresh fruit and vegetables.

Finding water was never difficult as many of the creeks were still flowing.

There is very good camping on top of the ridge between Highway 40 and I-80, about a mile south of I-80. At this place, road noise was not noticeable from either 40 or 80.