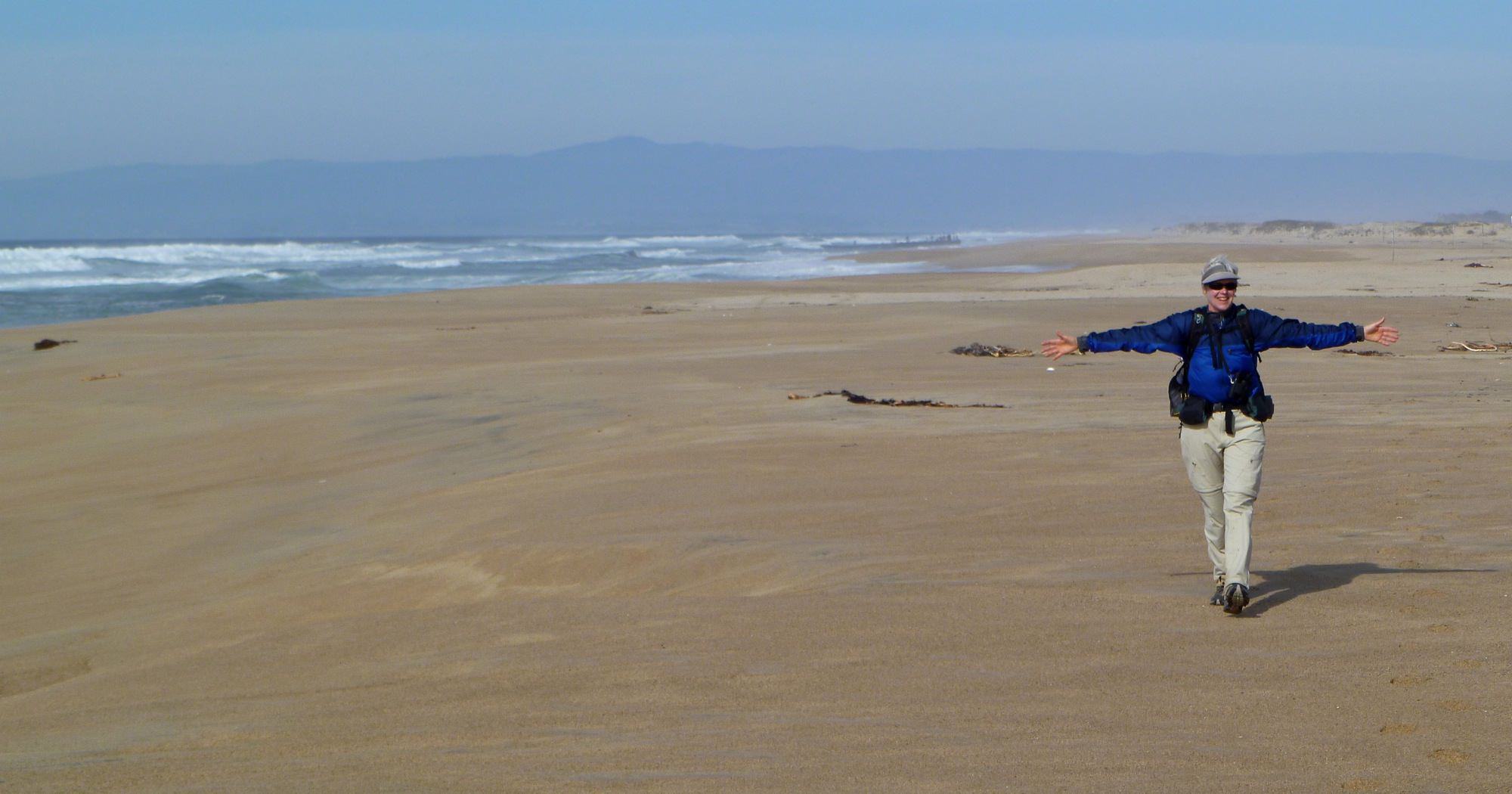 The California Coastal Trail website has useful information and maps.

Taking any coastal hike without binoculars and a good bird book would miss half the fun.

Transit and Trails is a good resource for public transit backpackers.

We enjoy coastal walking and have taken long coastal backpacking trips in eight different countries. We had previously enjoyed a 4 day hike along the California coast from San Francisco to Santa Cruz. Looking at maps, it appeared that continuing south from Santa Cruz to Pacific Grove would be a nice walk. California was in a drought so finding a stretch of good walking weather in February was not a problem.

In the prior 18 months we had taken three public transit backpacking trips, and we were looking for more ways to take pubic transit to visit areas we had not previously hiked. It proved to be easy and efficient to use CalTrain and express buses for this trip. It’s emotionally gratifying to go backpacking without using a car and the San Francisco Bay Area provides some great options. 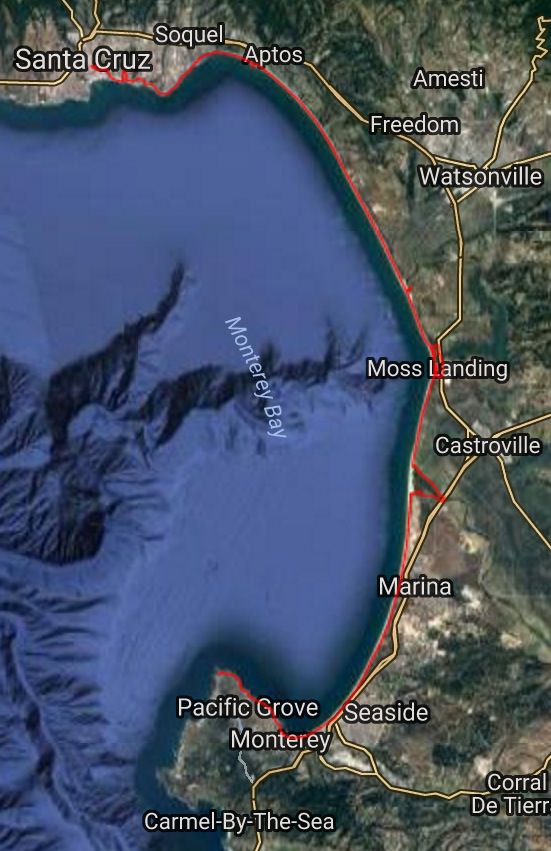 From the bus station, we followed a public walking path along the banks of the San Lorenzo River to the sea. View toward the small amusement park at the Santa Cruz Beach.

First view of the Pacific Ocean. The Santa Cruz Pier in the distance.

A short walk on the beach and then inland around Santa Cruz Harbor. The first six miles of the walk are a mixture of beach walking and following the coastal road; how much of each partly depends on the tides. The road walking was mostly on sidewalks through quiet sea-front communities.

The coast is paralleled by an old railroad. This is one of the bridges.

Nearing the start of almost fifty miles of sandy beach that forms a great crescent around the edge of Monterey Bay.

We followed the abandoned tracks for a short while before dropping to the main beach.

Looking back at some of the cliffs between the start of the long beach and Santa Cruz.

Lunch on the pier.

The municipal pier at Sunset State Beach near Aptos. Ironically, the junked ship at the end of the pier (which is made of concrete) is the SS Palo Alto and is named after our home town. http://www.concreteships.org/ships/ww1/paloalto/

Looking back north up the beach.

Marbled Godwits. There were lots of birds feeding along the surf break, loafing in the beach and out in the sea.

The walking was easy.

Looking back over the first obstacle: the mouth of the Parajo River. Fortunately the tide was low and so was the river as it hadn’t rained much in the last month. We were able to wade across.

Sunrise over the fields to the east of the campsite.

We are roughly halfway around the bay: looking north. The housing is part of the Parajo Dunes development.

The next obstacle: Moss Landing and the old mouth of the Salinas River. Unless you have a packraft, you have to walk around this estuary mouth to the Highway 1 bridge.

Wetlands at Moss Landing. There is excellent birding in the area because of a wide mix of habitat types.

Moss Landing harbor. this is the only harbor between Santa Cruz and Monterey. The green roofed buildings are part of the Monterey Bay Aquarium Marine Research Labs.

The final obtastacle: the new mouth of the Salinas River. This 1906 San Francisco Earthquake caused the river to change its course and find itself a new mouth. http://en.wikipedia.org/wiki/Salinas_River_(California). We couldn’t safely cross the river mouth because the tide was high and waves were breaking high into the river.

Waking up argicultural roads to the Highway 1 bridge.

Up in the dunes above the beach for dinner and campsite #2.

Sunset over the Monterey Peninsula.

Monterey. You can follow the beach right up to center of town near Fisherman’s Wharf.

A rocky shoreline has replaced the sandy beaches.

Near Pt. Pinos, the southwestern corner of Monterey Bay. Looking north back across the bay.

At Pt. Pinos with the Pacific behind us. From here we re-traced our path back to downtown Monterey and caught a bus back to San Jose and from there the train home. A total of 55 miles of fine walking. With the completion of this hike, we have now walked the California coast from Tomales Point at the northern tip of Pt. Reyes to Pt. Pinos.

I love coastal backpacking, and it was great fun to walk another stretch of coast near home. The transit connections were straight-forward, the walking was easy, the surf was crashing, there were birds, otters, seals, sea lions, surfers and a few fishermen. The weather was glorious, sunny and calm, classic winter between storm weather: about 60F during the day and about 40-45F at night. It was all good fun.

This was a rewarding and easy walk. Walking long distances on beaches is soothing and a fine way to relax. Not having to deal with a car made this trip even better. Anyone who is willing to stealth camp can do this.

We took CalTrain to the San Jose Diridon station and connected with VTA’s Highway 17 Express bus.

After we reached Point Pinos we waked back to the Monterey Transit Plaza where we caught MST’s #55 Monterey – San Jose Express bus to San Jose Diridon station. Then we jumped on CalTrain to get home.

We spent two nights stealth camping in the dunes. Although Highway 1 is often less than two miles away, the beach is functionally quite isolated.  Finding private places to set up camp was not an issue. Except in the vicinity of Pajaro Dunes, we saw very few people on the 24 miles of beach between La Selva Beach and Sand City.

The first eight miles is in Santa Cruz and Capitola on a mix of beaches and residential streets. From the Santa Cruz Transit Center, walk a few blocks to the San Lorenzo Riverway, a mixed-use path that follows the river to the beach. You can follow the beach south before you have to walk around the Santa Cruz boat harbor. From that point, pick your own combination of sand and streets to continue south. At the eastern edge of Capitola, acquire the Monterey Bay shoreline and follow the beach almost all the way to Monterey. To make the trip a little shorter, a hiker could take a city bus from Santa Cruz to Capitola or Aptos and eliminate some of the town walking.

Walk along about 38 miles of beach to downtown Monterey. There are three obstacles.

At the south end of Monterey Bay you reach the small city of Monterey. There is a nice coastal walk that extends the trip another 5 miles to Point Pinos in Pacific Grove. Many seabirds and occasional whales can be seen from Point Pinos. While in Monterey, it is well worth visiting the world-class Monterey Bay Aquarium.

Disclaimer: Do not rely on our exact tracks for your route; use skill and common sense. Use the stated distances as guidance.